QuiXoT -- Quantify any proteomics dataset labeled in any way? 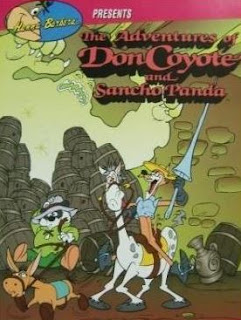 I feel like QuiXoT has been on the blog before -- because maybe I used a screenshot from this travesty of an 80s cartoon show (the only thing good about it was the pun -- that I didn't get till years later...), but a search doesn't reveal it.

...and available in pre-print at BiorXiV here! (I can not commit the proper capitalization to memory)

What is it? It is a pile of tools for quantifying mass spec data -- any mass spec data. It was first designed in house to quantify 18O (O18?) labeled proteins, but then they realized if they could do that, quantifying everything else was easy.

Immediately, my first question is what about 15N. It is never mentioned in the paper. Fortunately, in my country right now it is completely acceptable for you to perform any kind of formal business thru Twitter. You can break 100+ year established traditions at 3 in the morning, you can change military policy-- anything you want....just Tweet it out into the universe.

...I also wrote an email to the corresponding author, just in case they aren't up with the modern way we do things here in D.C....(sigh)...

BTW, you can get QuiXoT here. It has an awesome logo.

QuiXoT does need some manipulation to run. It isn't a super user-friendly GUI. However, it has a really nice feature called a "Unit Test". These are short tests that make sure that 1) You have all the pre-requisites to run the program 2) You get familiar with the steps of what you're doing and 3) You can get the data out that they expect from the data they give you.

Considering how hard it can be to get quan from 18O/15N labeled data (I know there are things, but it's nice to have alternative algorithms to run samples through) this doesn't seem too bad at all.

UPDATE 1 hour later (people in Europe get up EARLY!): QuiXoT can't do 15N, but it's still awesome!
Posted by Ben