This new paper in press at MCP by Martinez-Ferrando, et al., is a really good example of using cutting edge phosphoproteomics to open up our understanding of an incredibly interesting protein.  Although c-Src has been the focus of thousands of different papers, its amazing how much we still don't know about a protein that was discovered in the 1970s (and resulted in a Nobel prize for 2 top scientists in the 1980s).

In this study, a system was established to force the c-Src tyrosine kinase function to be active in a SILAC labeling system.  An interesting aspect of this study is that they only went for peptides phosphorylated on tyrosine residues, by use of the filter aided capture and elution (FACE) using the 4G10 antibody.  They didn't follow up with a metal or ion based phosphopeptide enrichment.

The proteomic analysis was top-notch, as you'd expect from the Pandey lab, using an Orbitrap Velos in 'high high' mode, where they used the Orbitrap exclusively, both collecting the MS1 and MS/MS fragmentation information (via HCD).  Both Proteome Discoverer 1.3 and Maxquant were employed because they often provide complementary information. My only criticism of this excellent paper is that peptide desalting was performed with C-18, which causes a loss of phosphopeptides, compared to other desalting methods such as graphite spin columns.

The results of this study are over 200 proteins that were shown to be downstream phosphorylation events that were downstream of c-Src.  The majority of these phosphorylations were previously unknown to be linked to c-Src and help explain some of the effects of this important oncogene.  They do a good job of 'validating' several of these events by western blotting and immunocytochemistry (ICC).

Summary:  A really good paper that shows how phosphoproteomics can really open our eyes, even when it comes to extremely well studied and characterized systems.  A good read for anyone in oncology research.
Posted by Ben No comments:

The Inficon Hapsite Portable Mass Spectrometer: One step closer to a Tricorder

If you have even casually observed any of the many iterations of the television series Star Trek, chances are you have seen the characters using a device known as a Tricorder, such as the one that Spock is holding below. 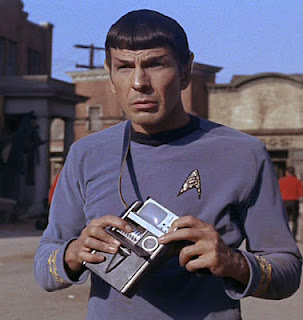 Tricorders allow these characters to instantly know whether the atmosphere of a planet is hospitable and helps them detect the signs of life forms and other possible dangers.  It has been humorously suggested at Mass Spectrometry conferences for the last 40 years that with miniaturization and improvement in mass spectrometry instruments, that we are actually heading toward the creation of these devices.

The Hapsite ER from Inficon is most certainly a device that is moving toward this direction. 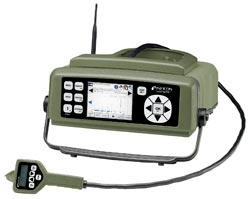 While this device is not as small as the one that Spock is carrying, it might be almost as useful.  This single person-portable mass spectrometer can rapidly deliver qualitative and quantitative GC-MS data in as little as 10 minutes.  According to Inficon, it can detect numerous volatile organic compounds, toxic industrial materials, and chemical warfare agents in this span and has a detection limit in the Parts Per Trillion.
If that wasn't enough, it also has a built in GPS unit so that the precise time and location of the sample collection can be saved along with the identity and quantity of the chemicals detected.

The following chromatogram is from the a mixture of 11 different toxic compounds, clearly showing that the Hapsite has the resolution to separate them all.

On this 14 minute gradient, they had sufficient resolution to separate all 11 in under 10 minutes, with spacing between peaks of around 0.5 to 1 minute, meaning that they really didn't push the machine that hard, I think that using the same column they could increase the intake pressure and actually cut this time in half while still getting the same number of IDs.
If you'd like to read more about this device, check out the product page at Inficon.