How is CPTAC doing? You can find out on 9/22/20 by registering for their annual meeting here!

I can tell you that the data is still on point. How they do that with all the scammy pass through organizations that are leaching off of this and other NCI projects is super impressive all on it's own!  One of those passthrough companies bought a professional baseball team thanks to being the go-between, and I react to that with some negative emotions, but it's just how things work here. We're just lucky that there is any money left to do science at all!

Chemoproteomics just leveled up with machine learning and limited proteolysis! 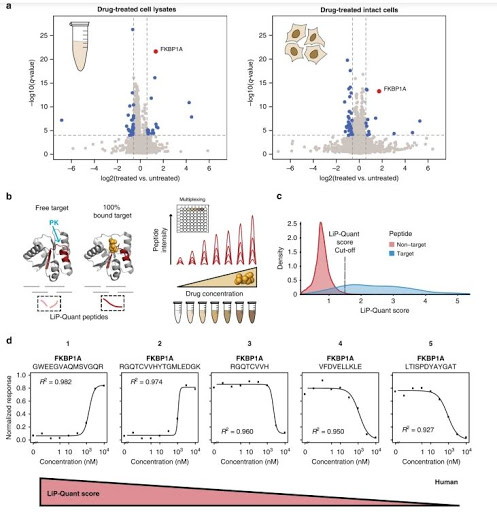 I've done a decent amount of rambling about how cool different chemoproteomic strategies are. Here is a good ramble.

Drugs have to do something biologically, right? Since everything biologically has something to do with proteins, chances are drugs interact with them. Chemoproteomics gives us a chance of figuring out exactly whom, where and what.

The argument here is that you lose a lot of information with the normal controlled digestions and limited proteolysis can help. However...whew...your day doesn't get easier from the data analysis side following a limited proteolysis. It's tough to do that with a single purified protein!

HUMOS -- How to understand Orbitrap spectrum(a)!

THIS is brilliant. From explaining Orbitrap data to new users to helping to fine tune experimental parameters for old people more seasoned practitioners of FTMS!

Don't want to read? You can play with a demo version of HUMOS online here!

Too many ways to visualize your data? Get from Data to Viz! 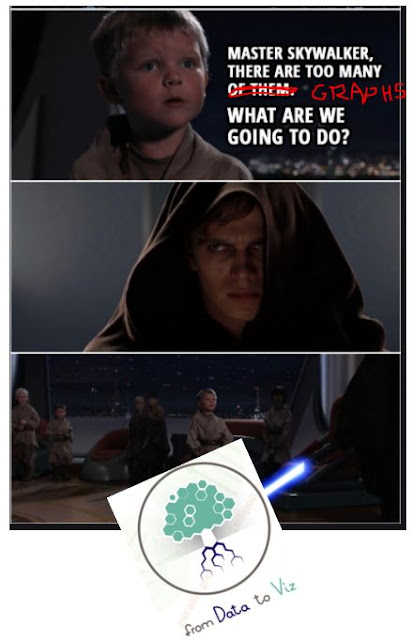 There are a daunting number of ways to visualize your data, but which one should you choose?

This award winning website does a great job of simplifying our choices AND then leads you to good ways to generate those visualizations!

Here is a quick example:

Looking for weird accessory and demo software from Thermo?

Are you looking for?

Offline Recal (to fix that QE file from when your air conditioner went out and the mass accuracy went crazy?

An older version of Xcalibur so that you don't have to use FreeStyle like a grown up modern person without memory limits cause you hate a software that automatically recognizes your scan ranges and can direct export to mzCloud for data analysis?

Or the newest version of Tune for your instrument (which almost all of them are decently easy to upgrade yourself now)? At the very least it's fun to download them and look at the "Bug Fix" documentation to see what they've fixed/added and whether it is something that is potentially affecting your results.

You can get all of those things at the ThermoFlexoPortal Thing! 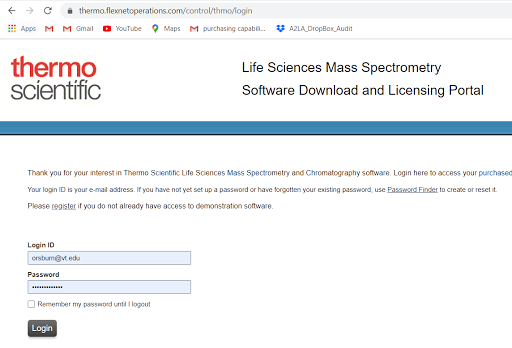 Once you register and get access you'll find a menu of ways to get to resources. In typical Thermo website fashion, the categories make no sense at all.

My recommendation is to ignore all of them. Just go to the Product Search category! 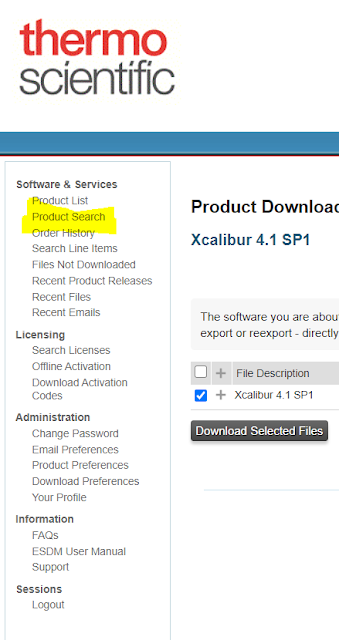 Unlike most Thermo websites, the Search Bar DOES work. I'm not even kidding.

Why? Oh, I just think I've got enough little programs running in the background that I can't keep track of and don't know what they're doing. Why do I want a new program to help me download stuff when that's built into my browser?

The best reviewer meme ever? 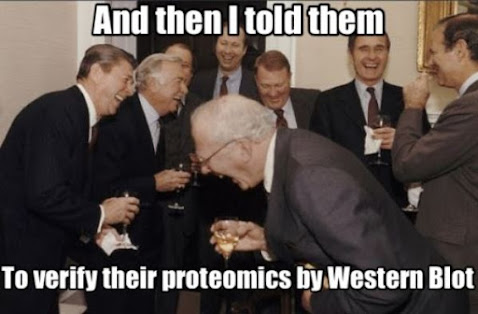 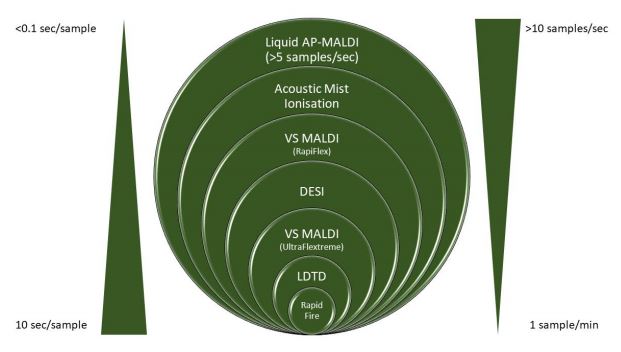 Who is tired of being told in 2020 that mass spectrometry is too slow and isn't sensitive enough? I've got a shiny new qPCR to play with and I think we've been lied to for 15 years or so. You need a LOT of copy numbers to see stuff...and...yo, that's not how we're told it works!

Edit: Put the paper link and title in! Somewhat important....

This new perspective in press at MCP is a really nice look at the relative speed of different protein analysis methods, from the fast to the crazy ultra fast.

Raise your hand if you want to go fast!

Could the resolution be lower on that gif? Meh. 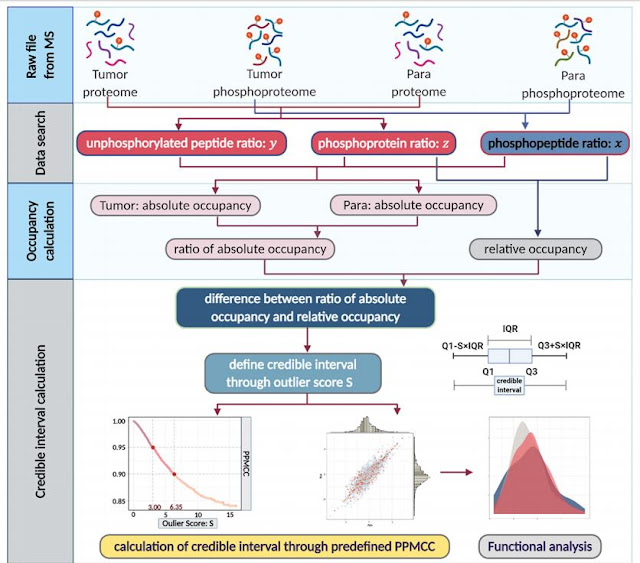 I really wanted to like this new study in JPR. And I might still like it, once I have time to look at the data, and I do really think it's worth thinking about, at the very least, as a concept.

Anytime you're combining global proteomics and phosphoproteomics, you've got my attention. Your idea has GOT to be better than how I do it in Excel for TMT and how I set it up in Proteome Discoverer for label free. Both outputs require a lot of manual investigation and lack those "stats" things everyone is (rightfully) worried about.

In this study, these authors combine global proteomics quantification and phosphoproteomics data. Yeah! That's what we need! And they do the processing in MaxQuant/Perseus with some R. (If the R scripts are included, I didn't see them on a first pass, and this is part of why I'm not loving this paper, I think).

The concept of a "Credible" phosphosite occupancy is pretty cool and it makes you think, right? I mean, you've got some phosphopeptides in that list that are definitely right. And you've got a whole lot that are....meh....phosphopeptides just kind of suck in mass spectrometry. What this group tries to do here is to use some simple algebra to look at the shifts in the phosphoproteome while taking that into account, and it seems to do work. There are pretty plots (actually, all the figures are really nice in this paper) and they seem to support the fact that this is a cool idea, and I'm going to keep thinking about it.

Where I've got mixed feelings here is that I don't think that it is possible to take this same set of data from ProteomeXchange and possibly reproduce what they did here. I've got the supplemental open and, maybe they forgot to upload the pages where they describe what settings they used in MaxQuant? Or Perseus? Or what mysterious R functions? Seriously, though, cool idea, I think. 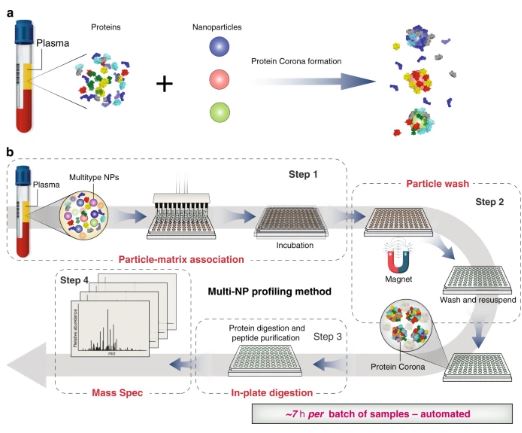 Did I flinch a little because I was afraid this was going to be a buzzword bonanza? Possibly. It even has the word "corona" in the title, but it is for something completely unrelated to what you'd first guess.

And...wow...am I glad I took time away from what I'm supposed to be doing today to read this! 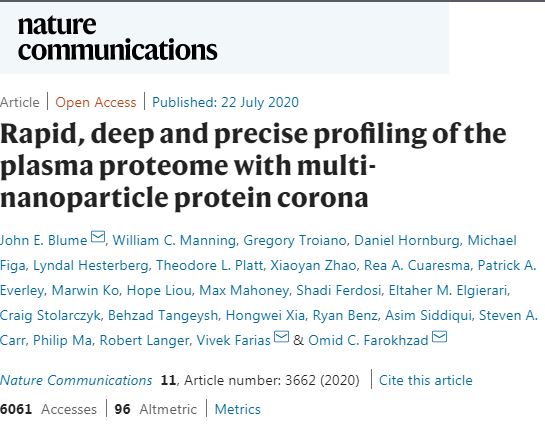 Well -- apparently nanoparticles can be made to do cool things, like bind to stuff that is protein and pull them down. And -- if I'm getting this correct (probably not) they can reproducibly create nanoparticles that pull down different protein sub-populations.

What it looks like is the "Top-14" depletion columns (the things that pull out albumin, transferring, and the IGgs and other super abundant proteins) taken 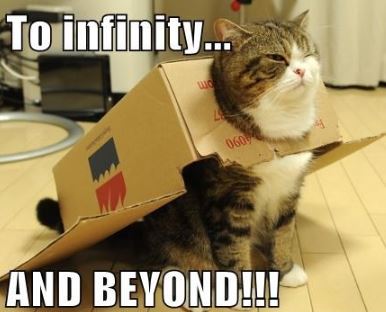 They develop and optimize a bunch of different particles and combinations with remarkable results shown on loads of different and important plasma samples and describe how they synthesized these nanoparticle things.

Can you synthesize a nanoparticle with these instructions? Maybe you can, but I can't even read all the words. I can guess what they might sound like and they're pretty funny.

My dog thinks something is wrong with me. So that's a no. However, this is still really cool and hopefully some enterprising person will say in the methods section "this is under commercial development" and I won't have to look up the author affiliations to see if it ---

Got it! (had to go the affiliation route).

Had to look up the affiliations. Some of these authors are at something called "Seer" and this is totally coming as a commercial product or service. I can't tell.

Back to the actual data. The authors demonstrate a stupid deep plasma proteome using a bunch of our favorite methods. There is DIA and DDA label free and some TMT in here. And, wow, does this ever make sense. And it is SO easy to automate magnetic bead based platforms.

PTM-Shepherd -- and a lot of implications for our experiments!

Whew. Okay. That was a long 6 weeks for me. The International Organization for Standardization does not mess around. And if you want to develop some methods and get them to sign off on those methods....you should plan to do nothing else at all for a while.
When I was last typing in this box, the PTM-Shepherd paper had just posted to BioRXIV and I really wanted to get back to it. 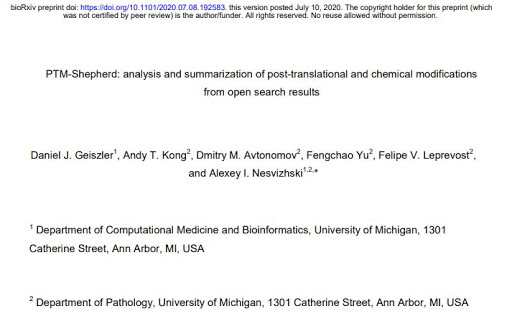 A thing that I've rambled about for years is -- "WHAT ARE ALL THESE OTHER MS/MS SPECTRA?!?!?"
One of the biggest behind-the-scenes developments for turbocharging proteomics occurred when the Orbitrap systems rolled out en masse and featured  "Monoisotopic Precursor Selection" also called "MIPS" or, later, "Peptide Match". You can use these functions without ever thinking about them, because they just work well, and help your instrument avoid things that obviously aren't peptides. And....when you end up fragmenting 100,000 things and you only identify 10% of them (probably more like 20-30% if your organism is really well characterized) it'll start to drive you crazy.
The first Open Searching tools started pointing us toward what these things are. And PTM-Shepherd is a new tool that helps push that understanding even further.
PTM-Shepherd is used in this study on several different datasets from different instruments and experimental designs. There are some really interesting mass shifts in nearly all the reanalyses, but the CPTAC-3 control set (that's the new Lumos TMT-11plex work) might be the one that is the most revealing about what we don't know about the chemical behavior of our most beloved workflows and protocols.
Like....I dunno...what the hell is a sodium adduct doing on my TMT tagged peptide?!?!?
And...to be honest, this is kind of funny from a small molecule perspective. Sodium adducts are so common in metabolomics that Compound Discoverer doesn't even show you when that is the actual ion that you've isolated for your metabolite (your metabolite + Na). Of course there are sodium adducts in proteomics, right? But who the heck is searching for them? Are you putting it in as one of your 7 possible modifications in SeQuest? No you aren't, because if you did, you'd have to subtract off one of the +H....and...if you've got that button, that's super cool, cause I sure don't.
Even cooler? It's great to see these things pop up with PTM-Shepherd because it's easy to start to think the lack of sunlight in Madison has been getting to everyone up there, since MetaMorpheus has been replacing +H with +Na (and similar) as a possibility in the searches, but now we see some nice charts from a separate group showing that these things are happening!
There is a big difference between finding PTMs and localizing PTMs, and PTM-Sheperd has a simple and elegant way of doing both.