Pierce Graphite Columns, do you really get more phosphopeptides than with C-18 Ziptips?

Pierce has been advertising their Graphite spin columns as a more efficient method for desalting and retaining phosphopeptides, but is that really the case?
In this experiment, we took a mixture of phosphopeptides that were enriched by filtered capture and elution (FACE) using the 3G10 antibody as described in this paper from Mathias Mann's group. 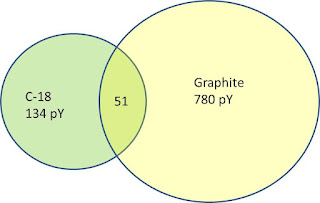 The results are pretty clear, although it is interesting that the majority of phosphopeptides pulled out by the C-18 columns were unique to that desalting method.
Our thoughts are to integrate the two techniques, perhaps by desalting the flowthrough from 1 method by the other.  Anything that increases our coverage this easily needs to be jumped on.

A frustrating aspect about being a postdoc who works on patented chemotherapy agents is the long wait before every necessary party approves my work for publication (or doesn't).  Because of this, I am extremely happy to announce that I got a paper through.  Unfortunately, it is a review, but it is a very nice review in an area that desperately needed to be streamlined.  The title is Challenges in Membrane Phosphoproteomics and it is an attempt to pull out methods successfully used in membrane proteomics that would be compatible with phosphopeptide enrichment methods.  The abstract is available here.
Posted by Ben No comments: