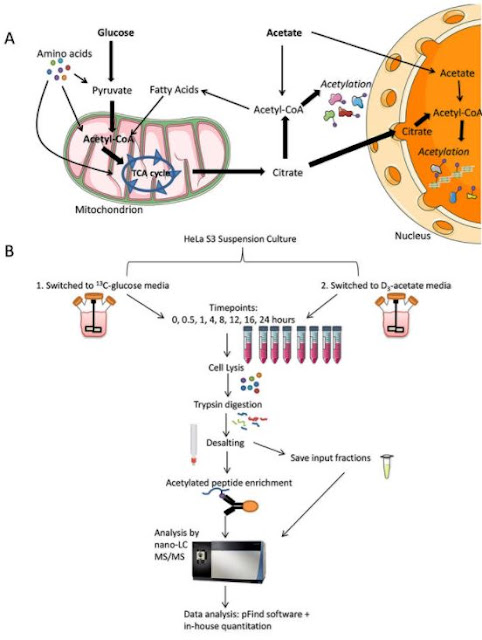 I was going to call this "new strategy" in the title, but I wasn't 100% for sure on that fact. I just know that I've never seen anything like this!

The strategy involves using heavy labeled acetate and glucose. Metabolic labeling techniques that are normally reserved for advanced metabolomics experiments -- but here they are used to track acetylation in the proteome!

One of the advantages of using the heavy labeled acetate media is that you pretty much know where that is heading -- through Acetyl-CoA to protein acetylation (sure it can go other places, but that's where proteins are going to pull from) -- the first observation this awesome study provides is -- HOLY COW HISTONE ACETYLATION is FAST!

Not phosphorylation fast -- but still freaky fast. Turnover, so de-acetylation back to re-acetylation in around an hour. Maybe that doesn't sound fast until you remember what histone 3D structure looks like.

Histones aren't just hanging around linear in the cytoplasm where their active site may be easily accessed by acetylases. They're balled up and complex and I'd expect alterations to happen on a more glacial time scale because of it. Sounds like whatever the acetylations are doing in there is seriously important because a lot of energy is being used to get them in and out of there.

Super cool new (at least to me) methodology and seriously interesting biological implications make this a great Monday morning read.