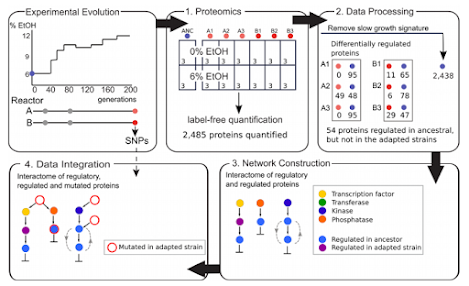 Remember when ethanol seemed like a really smart way to help reduce greenhouse gas production? I'm not saying it's not (I don't know) and I do see the warning signs on some gas pumps in the US that say "warning, 10% ethanol" (presumably because old cars can't handle it well). If yeast had a higher tolerance to alcohol and could make a lot more of it, producing alcohol becomes a lot cheaper and easier to do.

If we could understand it better, maybe we could mess with it and crank it up, right?

Time for some super smart multi-omics (I'd argue the experimental design might be the star here, though)!

Since this is a blog (supposedly) about proteomics, we'll focus on that. A Q Exactive HF was used for the proteomics with MaxQuant doing the data processing on these strains that were selected as they were forced to evolve increasing tolerance to ethanol in bioreactors!  How cool is that?

By selecting multiple different clones as tolerance evolved, they could rule out a lot of the noise of this pressurized selective process, landing on 25 proteins of interest.

I won't lie and say I understand the multi-omics gene copy number stuff but you can check that out. But if you immediately needed to make a yeast strain with a higher tolerance to alcohol than the ones you already have -- there is a short list in this paper of what genes/proteins to start messing with!