Where did all my scans go? Solving the scan averaging mystery on the TIMSTOFs!

This post has been edited on 7/21/2021 thanks to clarifications from the vendor and new clarifications will be worked into the software (that I've helped with, w00t w00t! to make this more clear in the future). I've also removed some words like "dummy".

This topic came up (again) for me on a call with an amazing mass spectrometrist who is....ummm... let's go with ....underwhelmed... with a recent TIMSTOF acquisition, so I'll put my solution to this mystery here for other people to reference.

I lowered my peptide concentration on column and my number of MS/MS scans dropped dramatically. 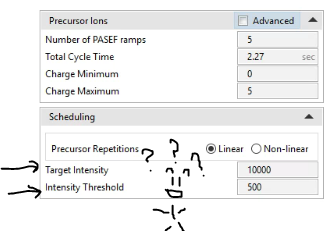 If you'd previously used a Thermo, SCIEX, Waters, or Agilent instrument for data dependent acquisition (DDA/IDA) you might be under the misconception of something like:

Intensity threshold is a cutoff where you wouldn't fragment anything with an intensity below that number. (Edit, 7/21/21, the threshold cutoff does work as a threshold cutoff, but it also has the functionality described below)

On a TIMSTOF it means something else.

What does it mean? It's easier if I draw it, but it is a secret formula for how many times you'll average or sum data to get an MS2 spectra! Duh.

Please note that the estimates I came up with are not entirely accurate. For a tool that will correctly estimate the number of MS2 scans summed, please check out this nice script from Weibke Timm on my Github here. 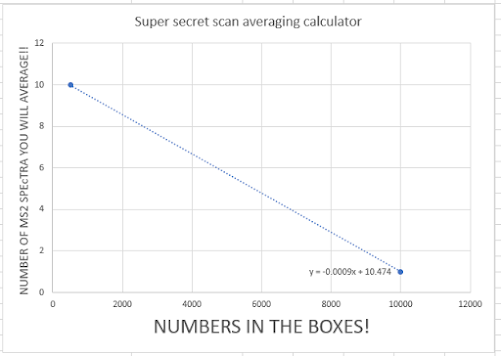 The numbers that go in the boxes is the x-axis. The y-axis is how many scans will be averaged to make that one MS2 spectra based on it's intensity. At the intensity threshold (or below) each MS2 is a sum or average of 10 MS2 spectra.

Check out what happens if I change the target intensity to 50,000 (which might be what your default setting is). 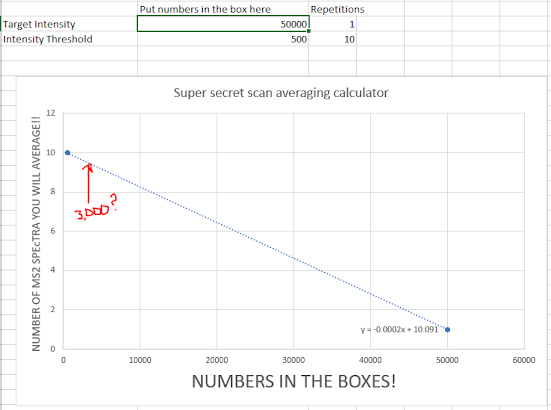 Basically any ion that is under 10,000 counts is averaged at least 8 times!!

For very low intensity ions, you sum a bunch of MS2 spectra which boosts their total singal. If you don't know you're doing it, though, you could be thinking you purchased a ceiling disrupting system that isn't as fast as your Q Exactive Classic. Do you need to sum or average 8 scans at 10,000 counts to get one MS2? I guess it depends on the experiment. However, you DEFINITELY don't want to be suprised because you changed a setting you thought was unrelated and drop your number of MS2s by 8-fold!

Just in case you'd find it useful, I put my TIMSTOFsecretscanaveragingestimatordrawerthing on my Google drive here. It's not anything smart, but if you put your intensity threshold and target intensity in the boxes it will plot across and you can estimate how many scans you are averaging for each ion. I suspect other maths go into it, but I at least find it useful when we're titrating down in the concentration of peptides on column.