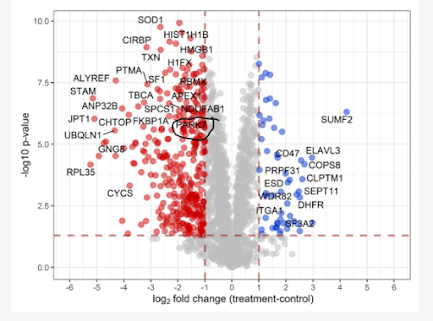 Okay. Great study on a super depressing topic. L-DOPA is, in the short term, often a miracle drug for people suffering from Parkinson's. There are some unbelievable videos that you can find pretty easily of someone having symptoms and then -- boom -- they're gone. But the effects don't last forever.

This new study shows that it's actually worse than just the development of resistance.

(As an aside, I would like to point out how cool most of these people's names are.)

There is a lot of work in this manuscript, some MALDI was done, as well as the creation of new ways of generating controls(?) on a microscale level so they could even do proteomics in the first place. A QE Plus was used for a lot of the proteomics data analysis along with PEAKS and MaxQuant.

What they find? Convincing evidence that L-DOPA can incorporate into the proteome of a human neuron cell line as well as a whole bunch of proteins that get all distorted in their levels of expression (top figure) due to L-DOPA related stresses.