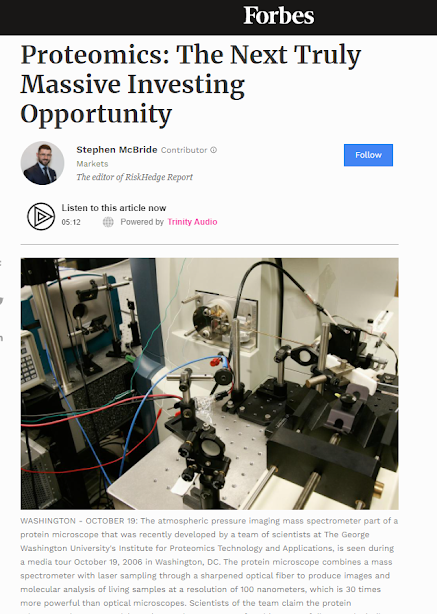 I go to the beach for a couple of days and come back to what?  Some weird museum mass spectrometer(?) on the front of Forbes?

If you didn't know Forbes appears to be a magazine for business people. You can check out the article here. If Windows has recently updated for you there is probably some new internet browser on your computer called "Edgey" or something and it doesn't have ad blockers installed on it. You can use that to view the article!

Thanks to Twitter, we've also been able to identify the mass spectrometer above. It is a MicroMass (pre-dates me, and I'm hella old) that was set up as above by some genomics researchers to demonstrate that proteomics people are clearly insane and the safe bet is still studying 30,000 human genes or transcripts, despite their general lack of biological relevance.

To the people outside of proteomics who are increasingly stumbling on this bizarre blog, our instruments are not nightmarish setups of weird wires and magnifying glasses shown above -- our cutting edge stuff is professionally designed, polished, and ready for prime time -- some of the newest examples look like this (the one in the middle is in our lab and sometimes people come by to just look at it, because proteomics stuff used to look like the picture in Forbes and, while the box shouldn't matter, it does suggest that maybe proteomics has grown up and might be worth a second look, particularly if in the 1970s or whatever, Frankenstein's mass spec didn't get them the data they wanted). 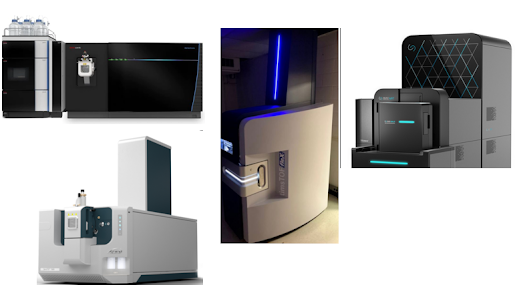 Forbes identifies proteomics as the future of medicine??? HOLY COW. Took freaking long enough for someone to goshdarned figure it out. So much money goes into genomics that they have been muddying the water for years. Lots of scientists don't know that there is basically NO correlation between the abundance of a transcript (as measured by things like RNASeq) and the abundance of the protein that actually does the work in the cell....I should get T-shirts printed....

While I'm super excited by the examples the author brings up, like the incredible work by Bateman Lab and collaborators that can detect Alzheimer's proteins 20 freaking years before symptoms develop, I do find this paragraph puzzling: 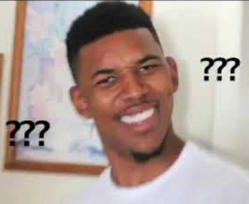 I don't know what slow people they were talking to, but I'd go back to industry or back to washing dishes at Big Frank's if I could only get shreds of protein data in 30 hours. Again, I'm hella old. That's way to slow. For proteomics outsiders, using an instrument released in 2012, we can get high depth proteomics (8,000 or so most abundant human proteins and post-translational modifications) on up to 16 human or patient samples in about 24 hours. The instrument in our lab pictured above? Can do twice that many/day with around 1% of the starting material (not even an exaggeration. underestimation, actually) . At lower depth proteomics TODAY is much much much faster.

While I'm very excited to see Proteomics get mentioned and to see some really promising new companies get funded, I am also seeing some unproven tech generating alarming amounts of money on very little data. I guess this is how it works, but I'm glad I've got a good seat for the show!