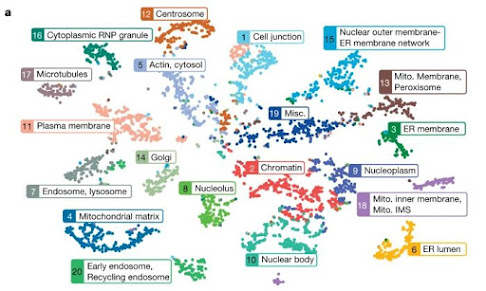 What a great resource and...wow...what a ton of work!

I'm not 100% clear on the differences between Bio-ID and APEX (except that the latter is faster) but they're both proximity based labeling techniques. I'm not really clear on them because in order to perform the technique you have to mutate or fuse a protein in your cell. Or...in this case....192 of them. Then under the right conditions your fused protein will biotinylate everything that is close to it. And just those things that are close to it. Violin! (Viola?) You pull down the biotinylated proteins and now you know all the things in the proximity of your protein of interest.

If you don't know how to fuse or mutate a protein you need to use another technique (or find a smart gene editing collaborator).

This group appears to have some people who can do it. And maybe 192 mutants made in a human cell line isn't that big of a deal. I'm going with...it probably is as hard as I think, or it wouldn't have went in that Nature thing.

After the mutations are made you need to do at least 192 experiments (one for each fusion protein) and they did this using an Orbitrap Elite operating in high/low mode using 60 minute gradients. Minor bit of interest for you serious mass spec nerds (weirdos.) is that the instrument didn't leverage ppm level dynamic exclusion widths, the instrument excluded everything within 0.6 Da. On something as simple as a Bio-ID experiment and a gradient of 60 minutes, I doubt that this has any real effect on the data, where in a global experiment it would cause you to completely exclude some coisolating ions of similar m/z.

The downstream analysis was performed using Mascot and Comet through the Trans Proteomic Pipeline. Results from that were sent through SAINT.

What did they get for all that work?

Check it out for yourself at www.humancellmap.org