Combine bottom up and top down to determine protease substrates in mitochondria! 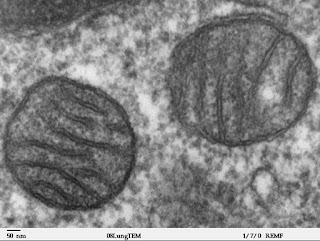 In our house there has been a lot of discussions on mitochondria recently. Fact check fail, retry. There has been lots of things said about mitochondria and, believe it or not, I do stop talking once in a while and listen.

Honestly, I forgot that they are there -- and its the one organelle I should know something about, cause they're basically stripped out bacteria that just do electron transport and make ATP. Turns out, though, that their dysfunction is linked to all sorts of different diseases (including maybe some nasty mental ones!)

What they use is a model where dopamine synthesis proceeds normally and one where it is deficient (see? brain stuff!) and they use both bottom up and top down proteomics to determine what is being used by the mitochondria under the 2 conditions.

Present in the top down AND bottom up analysis? Boom! Not a substrate!

Not present in the top down, but you can find peptides in it from bottom-up? The protein is being degraded as a substrate!  Heck, you could even use a de novo approach (they do) and figure out where the degraded proteins are being degraded at.

A nice short paper with a really clever approach to a biological problem. I'm sure there are other systems we could easily apply this smart approach to!  Bravo!
Posted by Ben