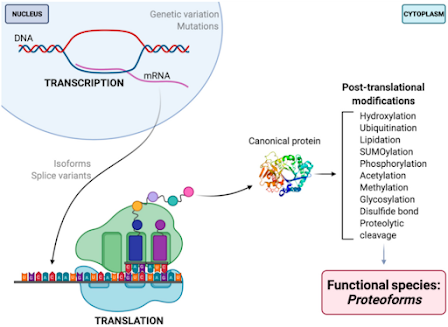 In all the excitement of "next gen proteomics" (i.e., the technologies that will soon make peptide quan by mass spec seem like a great way to waste both money and time while getting largely inferior data), mass spectrometrists will have several avenues to explore before those that won't adapt in time will end up relocating their labs to homeless shelters.

This review in Proteomes discussed one such avenue nicely provided by evolution:

Proteoforms! The basic fact that protein quan, while often better than trascript quan, is largely kind of dumb from a biological stand point.

Very few systems (at least in humans) are actually governed by a cell that made a whole bunch more of a protein. Sure, some of them do, but really that's not how any of these systems really work.

It's more like: kinase A phosphorylates target B and C. Target B translocates to the ER where it splices protein D. Phosphorylated targed C and spliced protein D form a tetramer with 2 of each of them and that tetramer migrates to the membrane and opens a pore. Most of the time 10 other things are ubiquitylated/ubiquitinated/sumoylated and THOSE are the actual phenotypes!

When that new guy shows up at your university with that benchtop thing that can quantify 7,000 proteins in 4,000 samples before lunch, that's your survival plan. Move toward quantitative PTMs and start saying the word "proteoform" all the time, cause that's the currency we need to be using.

I also think this is worth a read: