My unnecessary summary of SCP2021!

This is totally unnecessary because, if history is any indication at all, these talks are all being cleaned up and will be up on YouTube and singlecell.net shortly.

However, despite what I'd call a somewhat extreme case of virtual conference fatigue I made it through every talk of these great 3 days.

Since I'm confident I saw some unpublished data and I don't know what I can/can't share, I'll only talk about things I know have been preprinted or published.

Big takeaways from this conference? 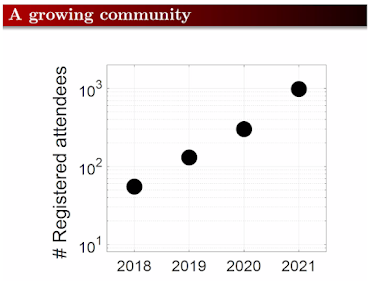 There were registrations throughout the conference, so these final number was actually higher by the end than when this was first plotted.

From the conversations that were public and that I had to the side in the chat bars it is clear that this was new to a lot of people. And there were a LOT of people who were not LCMS proteomics experts. There were real scientists who came to see if this was something that could solve their biological or mechanistic problems.

There was a jaw dropping advance in liquid handling that John Yates called "ingenious" and I was too flustered to even compose thoughts on a keyboard to support, that Andrew Leduc and Joshua Cantlon pulled off the day before the conference started. (It's also something I can do on our robot! ...theoretically...)
Takeaway #3 Even at the single cell level, RNA abundance does not correlate with protein abundance. So if you run into someone who thinks that's the answer to that whole riddle, the answer is still no.

Takeway #4 Maybe I sound like a broken record (whatever that means) at this point, but this next generation of proteomics/mass spectrometrists is just plain scary. I really like this conference because, sure, you get to see John Yates and Matthias Mann show what their groups are doing, but you also get to see talks from enthusiastic students doing cutting edge stuff. From the second talk to the very last one (a great talk on CE-MS at absurdly low levels of peptides) we got to see youthful enthusiasm from scientists who will clearly be much better at this than we are now.

Takeaway #5 Smart instrument acquisition! I'd like to point out again that at this point the majority of single cell proteomics data publicly available has been generated on the Q Exactive "Classic" system. And we saw EVEN BETTER data from my (personal all time favorite instrument) enabled by smart instrument acquisition through MaxQuant.Live. Yes, we saw some amazing data from Orbitrap Eclipses with real time search and software built to enhance RTS, and Mann and Cox showed data from TIMSTOF Pro systems that were modified to become the prototypes of the TIMSTOF SCP (and I showed data from our lab's $1.3M list system). But we also saw smarter ways of using the now 9 year old (yikes. I think that number is real) Q Exactive in smarter ways to generate data at the same level.

You don't have to be one of the groups in the world with infinite funding to get into this field. It's more important to get the cells sorted and samples prepped write AND

Slavov Lab has pioneered single cell proteomic informatics, but -wow- is that ball rolling now! I've typed about a lot of this stuff, but it's just getting better.

SCP (from Gatto Lab, check this out! Make it all a QFeature!) 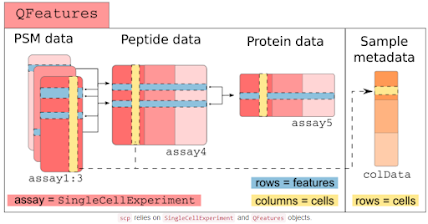 And worth noting, Cox lab is paying attention and innovating in this field as well.

There is clearly more on the way.

Takeaway #7 We're not going to get there alone. We need to think outside of "proteomics" to understand the proteome.

From the phenomenal (and somewhat science fiction feeling) recent work of the human protein atlas through the HubMap consortium and the crazy laser capture clinical sample microdissection work going on in the Mann lab it couldn't be more clear that we, as a field, need scientists outside our little LCMS proteomics echo chamber more now than ever.

As a final thought, the single cell transcriptomics people have a huge head start, and they have not stopped innovating. A couple new papers and preprints dropped this week that have shown really staggering work on trancript intracellular localization and we should probably pay close attention to what they are doing as well. Until we start getting (if possible) a much larger piece of the puzzle, if we can leverage their data in a complementary manner we absolutely should.

As a final final thought -- it came up more than once from outside our field that digesting our proteins is a big problem at both the proteome and single cell proteome level. The outside world wants top down proteomics to make that next step a lot more than even we do.