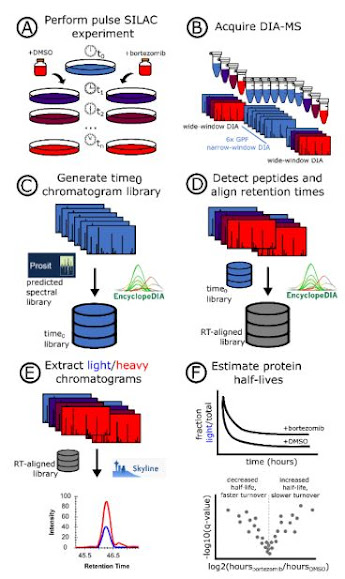 It's easy to forget about the "gold standard for proteomics quantification" these days since label free quan has gotten so powerful thanks to new algorithms and DIA, but it is still useful.

For a smart application of SILAC to study protein half-lives (turnover) with a smart experimental design -- with DIA -- check out this study!

What proteins are made or degraded when you tread cell line A with cancer drug B? Pulse in the heavy labeled media and you'll see what proteins are incorporating a lot of your heavy labeled amino acids and which ones aren't.
The study is easy to follow and should be far less expensive than your typical -grow your cells in $4,000/liter media for 10 passages SILAC type experiment.
You'd think that having heavy labeled peptides in a DIA window would impact data quality by increasing the overall complexity. From these results it does look like that's probably the case, but not by enough to make it a bad idea for solving a fun biological question. And -- check this out -- the authors get almost an extra order of magnitude from the DIA in terms of comparing incorporated vs not over DDA. I think just about everyone would give up a few peptides to dig that much deeper. Biological dynamic range is not our friend.
A Q Exactive HF-X was used and DIA windows were at 30,000 resolution. I really like Figure 3 and I've never seen anything like it. I assume it's some sort of wizaRdry.