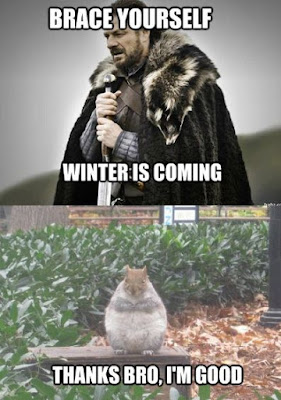 Is the super fat squirrel thing happening everywhere? In my back yard they're so round now that even my not-so-athletic dogs seem like they might actually catch one. It occurred to me that it's weird to see squirrels in the middle of the winter. Don't they hibernate or something? According to a lot of articles I found online (IFLS link) it is actually happening everywhere.

Okay -- so that was my question -- what about a real science question that I never would have thought to ask? How does the squirrel metabolome change during hibernation? For the answer you'll need to check out this new paper at JPR.

It turns out that Arctic squirrels (which, I'm pretty sure was also a band that my housemate in grad school was a fan of) do definitely hibernate -- and make a good model for studying hibernation. 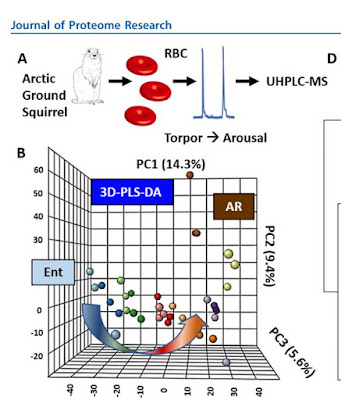 I assume it's easier to get blood from an arctic squirrel than from one of these things.... 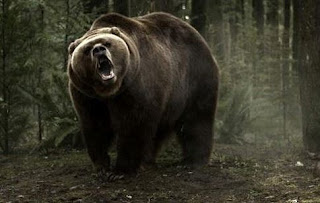 (Wikipedia informs me that a bear isn't a true hibernator, but the joke still holds, IMHO)

For the sciency parts --- blood was drawn from the squirrels both in full torpor (what I'd consider hiberation ) and coming out of it and then also fully awake and other time points and this is the samples that were used for metabolomics.

This team focused on the metabolic shifts in the red blood cells! I don't read as many metabolomics papers, but this isn't something I've seen before. The RBCs were separated and lysed and this is what went on to the UHPLC Q Exactive system.

When I do read metabolomics papers, I'm always surprised by how low the TopN is. You often see the Top3 or Top5 most abundant ions selected for fragmentation. The now possibly discontinued(?) (and awesome) Q Exactive Focus system was only capable of doing Top3 when it first launched. Unless you're doing UHPLC with crazy sharp peaks, this always seems like a waste of cycle time to me. This group uses a 70,000 resolution followed by a Top15 method for MS/MS acquisition. Rough math in my head says a 1.3 second cycle time if 15 ions are actually selected (which won't be often) and I can't see a downside to this (forget FWHM for peaks for high res MS1, you want baseline to baseline and this is going to still provide plenty of MS1 for accurate quan).

For the downstream processing, Compound Discoverer was used with a ton of databases (yay! if you have them use them!) including NIST, KEGG, LipidMaps, and an in house library of 1,000 compounds. MetaboAnalyst (something I need to check out and keep forgetting) was also employed here.

What did they get from all this work? A really interesting and surprisingly complete picture of the RBC metabolism in and out of hibernation, including some targets that they were able to get standards for and verify with absolute quan techniques.

Did I decide to read this paper initially because of the fat squirrels in my back yard? Yes.

Did I learn a lot about how to put together a solid metabolomics study as a consequence? Also yes!

Added bonus: I discovered that there subreddit that is completely devoted to insulting fat squirrels (of course there is...?). The goal seems to be to insult fat squirrels with the most profanities you possibly can, to the point that you have to be 18 or older to enter the site, and I probably shouldn't direct link to that.
Posted by Ben