Differential glyco and membrane enrichment in a KRAS mutant model! 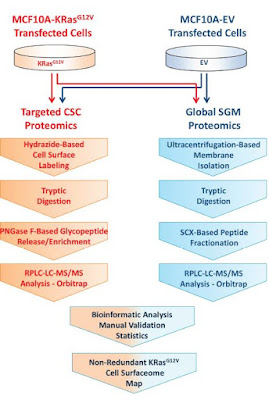 Full disclosure, I'm not totally unbiased on this one cause I contributed to it but the cool part is the upstream discovery workflow (and I only helped with validation).

The paper is in press at Oncotarget right now, but the pre-release version is available here.  In a nutshell, this paper comes out of the NCI KRas initiative, which hopes to better understand how and why KRas mutant cancers are so hard to treat.

They start with a cancer cell line that has normal KRas and they mess it up by transfecting it with a mutant version of the protein. (They also transfected some of the cells with a vector that didn't have the mutated protein in it as control cause, they're classical scientists like that).

The team then split the sample: 1 part got enriched for surface glycopeptides with a chemical that can't get into intact cells (reference here) and the other part was analyzed using a membrane enrichment strategy they developed themselves a while back that I've really only ever seen done at their facility, but absolutely works.

In the end, they come up with around 500 proteins and/or glycosylation sites that appear to change on the surface just cause the cell is now making some of that mutant KRas thing...suggesting why so many scientists have been studying this protein -- what it does is important.

For the downstream work they use my 2 favorite validation techniques ever! Some super gnarly immunohistochemistry with a  ridiculoulsy nice microscope (check this out!)

....so..apparently imaging technology has been improving...cause that is some sick resolution on the cell surface....

And I helped them check some stuff they were most curious about with PRMs using some heavy peptide standards they had synthesized. NanoLC-PRMs, FTW! Even on an Orbitrap Elite, which maybe doesn't have the best architecture for PRMs, you can get some ridiculous sensitivity and (of course!) totally linear quan!
Posted by Ben