WGCNA -- Another way to post-process your quantitative data 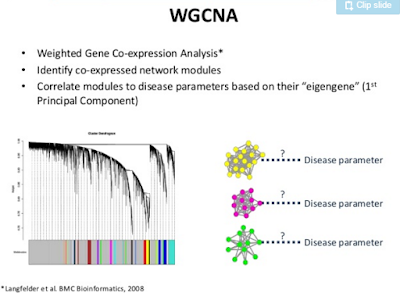 I think its about time we start some concerted spy missions. The genomics people have all sorts of cool tools. Lets send proteomics people to genomics meetings and then just steal all their cool ideas, which is probably less like stealing because they give away virtually all of their algorithms.

Case in point? This WGCNA thing. Notice that its been around since 2008. So..around the time we were all getting our heads wrapped around target decoy searches, the genomics people were like "hey, lets do some unsupervised clustering of our thousands of quantitative changes and see what stands out in a hierarchical sense"

What's it do? It tries to find patterns in your complex data without you spending all day looking up genes that make sense. Its just pulling out common traits and clusters them with your sample(s) and type(s).

How's it do it? Well, its in R, so it does it in the ugliest way possible. Does it look like the screen of a Commodore 64? Yup! Then its likely R, he world's most powerful and utilized statistical software package!

Besides that? I have no idea. Google Scholar informs me that the initial paper describing this algorithm has been cited nearly 1,000 times. So, somebody has liked this paper. Maybe I'd even toy with it before trying to check the Stats.

You can visit the WGCNA website here. It has links to papers and full tutorials.

Shoutout to Alexis for mentioning this algorithm to me a second time and showing me cool clustering data from it so I'd remember to share with people!
Posted by Ben