Single protein equilibrium in a cell 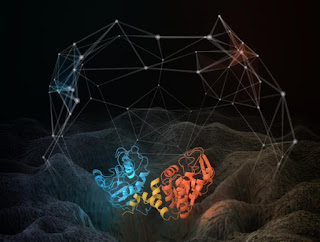 Wow. This is just fascinating!  Thanks PastelBio for sharing.

This link will take you to what I'm talking about. Its a press release of sorts about a new study in Nature Physics. Interestingly, from the time of the press release until now, it appears that they decided to change the name of the paper and it is available here (paywalled, sorry!)

The press release explains it better than I can, honestly, but they took that crazy super computer down in Tennessee, the Titan (19,000 CPUs AND 19,000 GPUs)

What they did was single cell protein modeling with all that processing power.

What did they conclude? That considering protein production speed and turnover via degradation, proteins may never actually achieve equilibrium within a cell. That you'd constantly be looking at a moving and changing population of even one single gene product. So if you were able to pull out just two proteoforms of a given gene product at any point in time, they probably wouldn't be the same.  One might be just formed and the other might be partially degraded...or reacted, or modified.

Is it real? Who knows? Its fascinating, though!  I guess it probably doesn't affect what we do much. I mean, we're looking at the averages of signals from thousands of copies of proteins from thousands or millions of cells at once, so maybe all of this averages out into just noise, but I always love things that highlight how little we still know about biology.