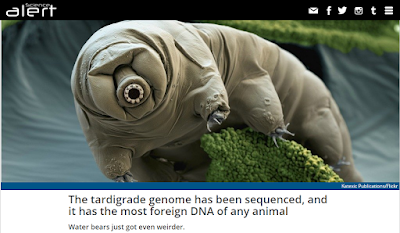 How on earth do you guys do proteomics on unsequenced organisms? I know there's BICEPS, which relies on genomes from similar organisms and error tolerant searches, but...besides that?

Okay, here are some good examples. They finally did the tardigrade genome, and its reeeeaaaalllly weird. But if the genome is only just now done, how did:

Well, the 2010 group did 2D-gels and compare their IDs against the current known protein sequences and the group in 2011 focuses primarily on highly conserved heat shock proteins.

So, you do what you can with the proteins that are in the databases. Or you study something that doesn't change from organism to organism.

Why is this cool, other than the fact that tardigrades are frickin awesome?  Cause this is a perfect example of a great meta-analysis project. Google Scholar pulls up 5 studies that appear to be at least partial proteomic analyses of these ridiculously cool organisms. Every single one of them was performed with imperfect genomic or protein databases. If I was looking to write a nice and reasonably high impact paper this weekend, I'd be downloading this genome here and seeing how many of these papers submitted data to Tranche and PRIDE that I can freely download and meta-analyze. Then maybe we'd know how these weird, indestructible things tick...or dance...or swim....

UPDATE 12/5/15: Ummm...okay, so maybe hold off on that meta-analysis... the work of this study above has been an explosion in the genomics community. It appears there might have been some errors. I LOVE SEEING SCIENCE IN ACTION!!!  Maybe all this is real, and maybe not, but either way we'll be further ahead!  Discussion on the controversy here.