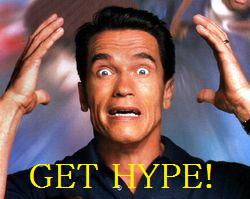 At first you might think I was initially a fan of this paper because looking up the protein and nucleotide in the title is a gold mine on Google images. I'm not saying you're wrong, but there is more to this cool paper even than the JPGs I'm probably going to insert while I'm writing this.

A few years ago people were pretty hyped about AMP. Remember this? 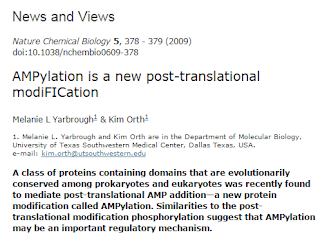 It looked like AMP was going to be a great big important PTM.  Turns out, however, that its an absolute pain in the foot(?) to study with LC-MS. A couple labs gave it a good hard try and got some nice results, but their techniques maybe looked a little too painful for us to want to replicate.

In this new study in MCP from Malgorzata Broncel et al., we get to see a high throughput, high sensitivity, high resolution way of studying this modification! 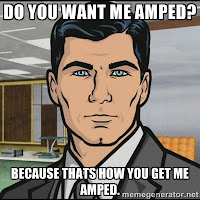 How'd they do it? Without radiation!  They used inert chemical probes that are attached to analogues of AMP. This technology was developed by other groups for doing visualization or protein arrays. Turns out, though, that they make a nice target for selectively pulling down proteins that had picked up the labeled AMP, and are conducive to ionizing and fragmenting in a Q Exactive.

If you are interested in this PTM, you've got a protocol now!  And along the way they studied some super important protein named HYPE that has a lot to do with bacterial infections and may lead to nice drug targets for us to use in the post-antibiotic era!