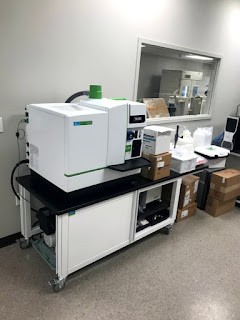 Hey! What's this thing? This is my INDUCTIVELY COUPLED PLASMA MASS SPEC thing that is being installed on Monday!

What does it do? It uses a frickin' argon plasma beam to convert anything (even metals!) to gases and then basically uses unit resolution to tell the elements apart. 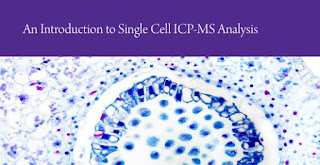 It's pretty sensitive -- this white paper tells you how to set up an older model than mine (!!) to  quantify how many molecules of cisplatin (a chemotherapeutic that has Platinum in it) are in each individual cell by turning each whole cell and into gas phase primary elemental components and measuring the Pt signal).

-- I can't access it either. I think the paywall just asked me for more money than Mario Kart for the Nintendo Switch -- and I don't yet have Mario Kart for the Switch.....yes...it's the same game as the Wi U...which I do have...but.... 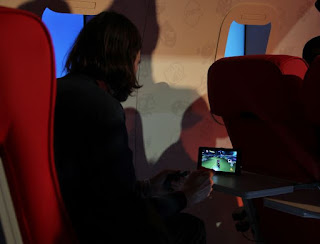 ...look how cool that guy is! He can play Mario Kart on a fake airplane (where is the other seat!??!) with his Switch! That could be me, I just have better hair.

Sorry ElfSeverer....I'm going to read some other papers and -- whoa -- this is almost related - check this great new study out!

We use a lot of metal based drugs in the clinic. And we use them cause they kill cells we want dead. However, just like everything else out there, we often don't know the whole story. 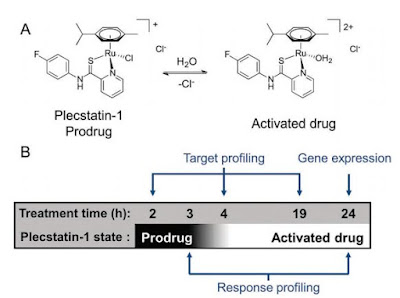 As you might be aware -- Platinum is expensive. You can make a LOT more drug for the same price if you can replace Pt with another transition metal (Google says Pt is 30x more expensive than Ru) -- which is one reason to follow up on new drugs. According to this paper -- when they've done these switches it hasn't been exactly apples to apples. The drugs may be just as effective but the mechanisms may be a little different(!?!?)

They sample at multiple time points and use a load of techniques to figure out what is going on with this drug. All the ICP-MS is in the discussion and it sounds like it was used previously cause you can track the Ru easily with that technique. What they do here is pull-down shotgun analysis with a Q Exactive using biotin labeled Plecstatin-1 and activated drug.

The two drugs pull down very different populations of proteins -- with the prodrug interacting with proteins that just appear to be from initiating a generic stress response -- the activated form, however, is binding strongly to the target (Plectin?)

They do some further stuff where they modify the drug and repeat to try and figure out the important parts of the drug toward the mechanism of action they're interested in -- and how it changes over time and it appears to point to specific bonds as critical!

What is the moral of this story? Ben needs more hobbies? Probably. But maybe -- it's that ICP-MS can be a valuable tool for drug mechanism work and all sorts of other things (mine's primary job will be trying to protect young people from inhaling lead particles...a problem that is increasing rather than what it should be doing) but there is a bunch of other things it can do (and if you have some ideas where 3 minutes of intense ionization with an Argon beam might help you solve a puzzle? reach out! No joke -- it's 3 min per run. I'm worried about how to keep it busy!)