Study of DNA polyploidy cells is really a nice analysis of RNA-Proteomic correlations! 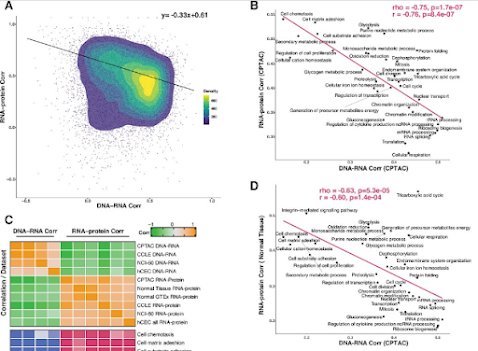 I started reading this because cancer polyploidy is really strange and very cool (honestly, I thought this was going to be background so I could better understand a recent paper out of Josh Elias's lab). Turns out the two things are only loosely related, and if I sort out the latter enough that my notes make sense, I'll come back to it later.

If you aren't familiar with polyploidy, DNA divides in these cells, but the cells themselves don't. And some evidence supports them as being the origin of metastasic lesions. BIG DEAL.

While I'm trying to force some new concepts into my tired old brain, there is a lot of this paper that is less difficult to grasp.

Including some really exhaustive analysis of RNA to protein abundance correlations! No surprise, they aren't very good (the "correlations") but there is tons of great new stuff in this study, so the orange publish button will probably get hit.