Sample prep for tears from a common clinical test strip!

I guess the moral of this story is maybe we do sometimes need to invent new sample processing methods. This is, however, increasingly rare in my mind, but this seems to be a case because it appears that most people don't like having pipette tips near their eyeballs. 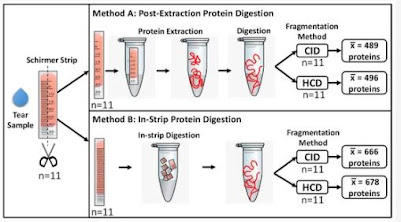 The tool used in the clinic to collect and and measure tear production is called a Schirmer strip and this team tested several methods to obtain the best proteomics data from this tool that is already in use (I swear some of the best proteomics samples comes from stuff people in hospitals are about to throw away! Maybe this is another case?)

The instrument in use is a Tribrid system so they also had a bunch of fragmentation methods to try as well, but they couldn't just load this big strip into a little S-Trap. I would have thought that doing method A above and then loading that into an S-Trap would be the way I'd go, but it doesn't look like the proteins want to let go of the Schirmer, because the best data comes from digesting off the strip itself. There you go, a legitimate reason to invent a new proteomics sample preparation method!
Posted by Ben