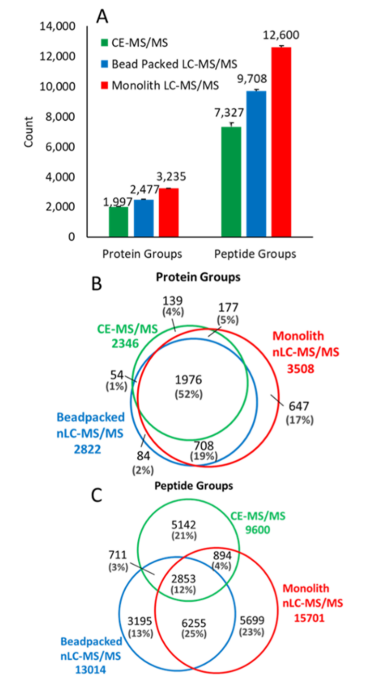 I was hoping to see this one soon after getting a sneak peak at SCP2021! If you want to watch a talk describing some of these results it is available on YouTube here.

I think what is most striking here is how very complementary the 3 separation techniques evaluated are. When we drop to these ultralow abundances like single cells all the stochastic effects that we're used to seeing when we run a high concentration sample 3 or 5 times are dramatically magnified. This is why in some of the published studies of single cell proteomics you'll see something like 2,000 proteins identified in the study but each individual LCMS run will often only have 300 or 400 protein IDs.
What this looks like is a way to get at things with CE that you'll completely miss with LCMS alone. In addition, while I know this is a CE-MS study -- ummmm....the monolith columns really seem to shine in this analysis!
The CE system used here is the (I'm pretty sure) big floor mount one from SCIEX. As much as I like the little source sized CE system, the units that I have used have been far less sensitive than conventional nanoLC and I don't think they could be used for an application like this. One the early beta units where you had 100% control of the loading pressure, time, and voltages for loading your sample...maybe... The commercial units don't give you that kind of control.

The MS system used here was the Fusion 3 Eclipse system and, don't quote me, I read this earlier in the morning but I think the data was processed with the stand-alone Byonic software from Protein Metrics.