FragPipe -- MSFragger made a bit more mortal, and a lot more powerful!

I've been meaning to do some tests with the new iterations of MSFragger and finally had a few minutes to do some extremely limited tests. More coming.

Let's clarify what we have here:

MSFragger is the search engine. It is impossibly ridiculously fast in command line format. If you had to remember one thing about MSFragger it's that it's the open search engine. Let it search for any delta mass shifts within 500 Da of your target. It'll find those masses, and it will find them in seconds or minutes not hours, days, months, or millenia (some engines might honestly take more than a human lifespan to do a delta search, I don't have the patience to verify). I also only used 500Da as an example.

MSFragger nodes work directly in Proteome Discoverer and the newest ones even work with all the quan nodes!

From what I wrote in that post, I'm trying to guess which computer I used for it...and I'm going to guess it was a 7th gen i7 laptop that I don't use much these days. Last year TSA agents were forced to work without pay for 35 days or so and...well...airport security was a little more intense at times and my laptop got dropped and bent and getting it to go power on requires some careful flexing around the power button. I'm only rambling about it because it might be important in a minute. 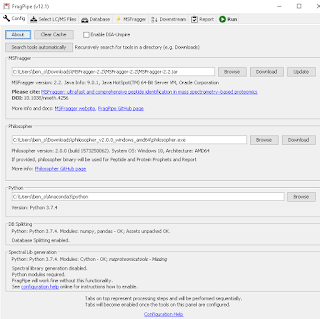 (clicking on this should expand and make this less blurry)

FragPipe is the package that contains MSFragger and all sorts of great stuff to make it useful. I'm using the Windows GUI version and it links directly into the Philosopher and it does all sorts of cool stuff like automatically downloading and formatting your FASTA files and directly reading from RAW files!

I haven't tried the DIA Umpire options yet (or many others, but I suspect I'll get to them soon. This is WAY too cool not to spend time on).

For those of us who get to one format of data input/output and get stuck on it a little -- there are MSFragger Proteome Discoverer nodes now!  I've got a partially written post on here somewhere that I started a month ago and just realized I never finished....on the wrong continent and I don't want Proteome Discoverer on the PC I am using right now.

There are some steps involved in setting up FragPipe, but the tutorials are great, and the software gives you prompts. Got a Java that's too new? Installed an old version of Philosopher a while back? It fixes all that stuff.

To the mortal part -- and the PC. When I first ran the command line MSFragger (I linked the post above) I spent a lot of time just hitting the enter button to see if it really was completing searches faster than I could click the enter button again. I'm not kidding, it is that fast. To the point that you assume it errored out and there could be no data -- but there was data! However, a huge list of potential matches and OPEN SEARCH shifted masses was a little overwhelming. Obviously lots of power but, for me, some limited practicality compared to MetaMorpheus which provided a more practical output for me. (Is there some sort of Ann Arbor/Madison rivarly thing based around cricket or quidditch? I think there might be. Let's extend it to free software!)

FragPipe is doing a lot of stuff when I run it now. Way more stuff than MSFragger was doing. It's taking my vendor format binary file (RAW) and it's running with that. It's making a file of my decoy reverse stuff. And -- it's running on an i3 I got off Amazon for <$300 and upgraded (SSD and RAM) to be slightly less of a catastrophe (go ahead and drop it TSA, everything is backed up on Cloud things!)

Total run time per file? I'm hitting around 11 minutes with a 500 Da open search. A 500 Da open search!  That's hella fast. It's just not instantaneous. It could be the laptop I got for typing and battery life and NOT for data processing, but it could be that MSFragger is the fastest thing ever, but all those other new steps take time. I'll check on other PCs later.

I didn't tell Fragpipe any modifications at all and just Open Searched it. I kicked out the TSV file into Excel and used "Ideas Artificial Intelligence Button" (LOLs!) to make a Pivot table and chart. What do you know -- loads of iodoacetamide and alkylations. (I think that's a nice test for an open search engine. Find the stuff you know is there first!)

FragPipe -- Totally works -- easy to use -- still crazy fast -- and now has all the tools around it to make MSFragger a complete package. 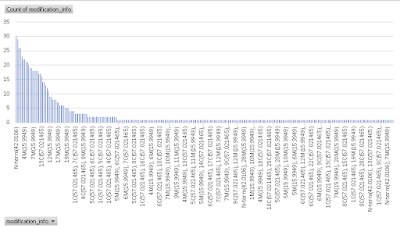