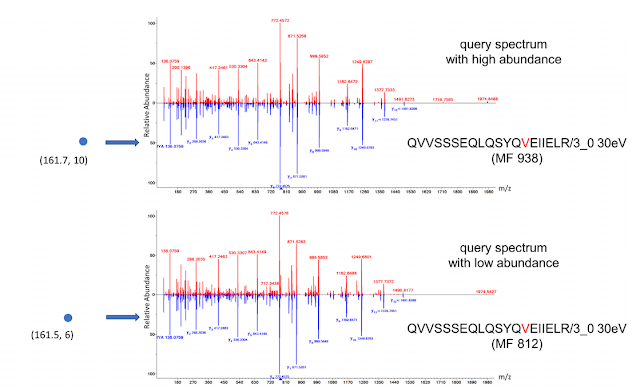 Recently there has been an explosion of new evidence that proteomics has value in forensics analysis. While it's obvious that this is a great thing -- I'd also argue that it might be kind of a scary thing as well. Could you, for example, determine every sample I've ever prepared in my life from the RAW data by identifying a specific keratin peptide variant that is unique to the majestic Pugs that I've dedicated my life to rescuing and protecting from a world that isn't nearly good enough for them?

This new study from NIST suggests that -- yes -- this and possible AND can even be used for the identification of human genetic variants (which you could effectively argue might be an application of this technology that would be slightly more widely applicable...I guess....)

I'd like to point out a technical in this study that is really cool. They did In-gel digests of these hair samples. The gels were then stained with SimplyBlue Safe Stain. Then the gels were scanned.

Why'd they scan the gels? To determine where to cut the gels so that the protein loads were thereby equivalent!

Should I know about this? Why haven't we all always done this when using SDS-PAGE to fractionate our proteins? We could break out the scanners and the Windows XP software that is up on a shelf somewhere from the days of 2D-gels and make them easily do this, right?

Back to the study -- they use all sorts of different extraction conditions and protocols and that is a big part of the study -- developing the methods to do this, but I'm obviously going to focus on the data -- and this is reaaaally cool.

They're starting with a standard and well-characterized hair sample (cause you can obviously get standard hair material(?)) and they use MSPepSearch to analyze the peptides from the digested hair. 40% of the peptides don't match anything in the NIST human spectral library database. 40%!!

In my mind there are 2 main causes for this and my first guess would be
1) The default button in MaxQuant and other software to ignore the common lab contaminants. I'm sure I've mentioned before my difficulty in studying phosphorylations in keratins because the software just hid them by default -- geez -- that was almost a decade ago.... my layout for PD 2.4 is still set to hide wool, Pug and trypsin peptides
2) Is it individual variation? Could it be THAT prevalent? That would be nuts, right?

The authors deploy NIST Hybrid Search to answer this question. If you haven't tried this, you should. FAST and accurate identification of delta shifted spectra against spectral libraries. I feel like I've given away too much stuff in this great paper already. It is NIST, so the paper is open access.