This new study at JPR is interesting because the results are substantially different than other reports out there (and my own personal observations!)

This is a comparison of iTRAQ 4-plex, iTRAQ 8-plex and TMT 6-plex on a 5600 Triple TOF. In their analysis they get WAY more peptides with proteins labeled by iTRAQ 4-plex than iTRAQ 8-plex. Okay, I'm fine with that. This has been found a bunch of times before, but I've never seen anything this dramatic -- it is seriously like...50%...or less!

Where this gets weird is that they find more peptides if they're iTRAQ 8-plex labeled than when they're TMT 6-plex labeled...and...this is very contrary to my observations and most of the papers I've seen on the topic. Less than half the number of peptides?  Umm...if true this is a seriously big deal!

Let's see what is different!

Okay...I don't know anything about the organism they are using and I'm seriously late so I don't have time to investigate, but I'm gonna assume it is relatively normal as organisms go -- let's focus on the tags! 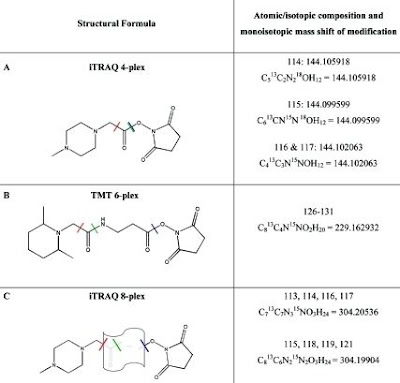 Google Images pulled this up -- but it doesn't link me to the original source. If this is yours, I apologize, and I'll totally give you credit for it if I knew who you were!

Here is my first thought -- the iTRAQ 4-plex tag is relatively small -- it only adds 144.102 Da to your peptide. That's one big amino acid mass shift and that is it.

I'm gonna go back to one of the few posts from 2012 (holy cow...I was so much dumber back then!) that I haven't deleted out of just embarrassment. 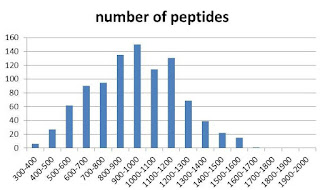 This was a map of my general distribution of the (m/z) of my identified tryptic peptides from this huge pool we'd created of my boss'es depleted serum (hey...I'll argue all day that it was a better run to run QC than a BSA digest!)

First of all -- for my stuff (and, again, I don't know their organism) only fragmenting to 1249 would be a pretty massive hit in my peptide numbers!

But consider this one....if we added 144 Da to all of these peptides. And..yeah...I know...iTRAQ will add 0.5 charges or whatever across the pH/pKa thing (holy cow I'm late! words words words!)  ignoring the charge shift, I'm going to lose quite a few identifiable peptides.

I'm not being critical. Maybe this instrument can only scan to 1250. I don't know. If that is the case, WOW! you should definitely only use iTRAQ 4-plex!  Maybe that is why they report so many missing channels on these devices when doing isobaric labeling -- again, not an expert on this one. Just seriously curious!

Let's look next at the "Adjust CE if iTRAQ reagent used" -- there is very little info on this one. Close as I can get by sacrificing a shower to finish this is maybe this PLOSone paper from 2015.

On page 5 it suggest that this feature may just be extra collision energy for the iTRAQ reagents. And this is going to be my only guess at why iTRAQ 8-plex outperformed the same peptides tagged with TMT 6-plex in this paper. One of my favorite things about TMT 6 or 11-plex is that I really don't need to fool around with the collision energy. The TMT tag appears to come off just fine at the same CE that I use to fragment peptides. I know some people crank it up a couple volts, but I don't think it is critical.  For TMT 8-plex? HECK YEAH you crank up that energy!  Is it possible that using this feature on TMT tagged peptides might over-fragment them? Maybe...?

I don't know -- it is honestly just me brainstorming on why this doesn't match my own personal observations.  And...well...procrastinating...whoever wanted to meet at the gym before work every morning this week is dumb...and, yeah, I hope you read this!

One more thing of interest in this paper -- the figure at the top!  I'm fascinated by the fact that Mascot distiller running Mascot and Proteome Discoverer running exclusively Mascot with the same Mascot node settings came back with slightly different results, but I'd suspect it would make sense if we looked at the Raw file to MGF conversion or node settings in depth.

I hope I don't come off as critical of this paper. I think it is a really good work, well written, and just plain fascinating!