Have you ever needed signal so bad you'd use a jet engine to concentrate your ions? 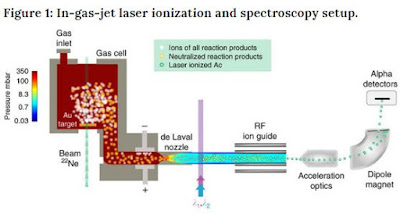 We don't often get super desperate for signal in peptides these days unless they're reeeal weird. Our intact protein counterparts are often scrounging for a few more ions -- and man, drop in on the metabolism/omic/onics labs? You'll normally see some people trying everything to just get a few more ions out of the noise.

These guys? This is a whole new level!

They're doing the real basic stuff -- just trying to add some stuff to the periodic table -- and they've been real good at it. This new technique allows them to get even further.

The techniques they used in the past relied on detection of these new heavy element particle created in accelerators in their "native" (feel like I'm mis-using this) state. We know that ions are a whole lot easier to detect, right? So -- this new process makes ions out of their heavy elements with a laser.  That helps a whole lot! But to boost their signal? They concentrate gas with their heavy elements -- with a JET ENGINE. The gas coming out is MACH 6. But it's concentrated.

Don't know about you, but I'm impressed!
Posted by Ben