Proteome Discoverer 2.5 just launched this week. You can get it from the ThermoFlexeraFlexibleNet thing here. I think there was a lot about it at the fall user group thing, but I still haven't caught up on all the talks from ASMS that are on my list, the single cell proteomics thing at NorthEastern, and HUPO was last week.

If you're going to use it please keep in mind that it will default to 1 processing and 1 consensus workflows. If you queue up 60 things on your 72 thread PC and go out for a bit, you might be mad when you get back. Install it, go to Administration, parallel workflow settings, set it to something reasonable, then close and reopen the software.

I just downloaded it and am messing around and it looks a lot like version 2.4 with one big new focus:

You can basically run what I think from the manual is basically PROSIT, directly in Proteome Discoverer!

You go to the Maintain Spectrum Libraries thing that has always been there that you've justificably never used: 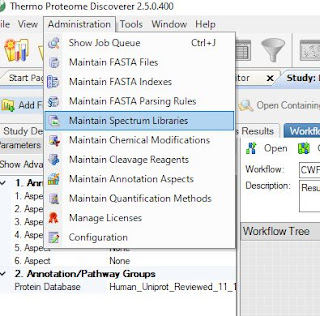 And now there is a button to "Predict a Library!" 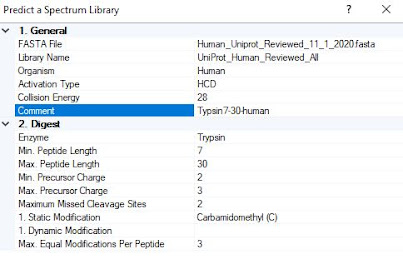 What do you do with your fancy new library? You can use that to search things instead of dumb ol' SeQuest because now you're fancy new library can go right into an improved MSPepSearch that can run multithreads!
I suspect you can take your library out and use it in other programs like the other Prosit libraries. Unfortunately, I queued up like 60 files without fixing my Admin settings.....I should put a note at the top!
Interestingly, predicting a library isn't set up the way local PROSIT is. If you set up PROSIT, you need an Nvidia GPU (otherwise known as a video game card...the thing you need to put in your PC so you can run Crysis) and it runs locally there. PD runs on the CPU and....wow....it doesn't hold back.... NOW the office is warmer!  DIA-NN does the same thing when it runs, so that's cool, and everything. 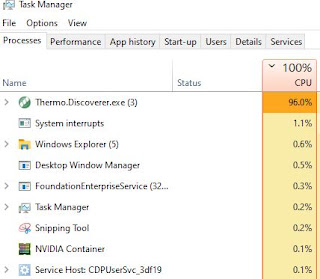 What would be fun would be a deathmatch! DIA-NN Libary prediction vs Prosit vs PD 2.5 library prediction! Someone should do that....
That's not all, though! There is a new toy called: 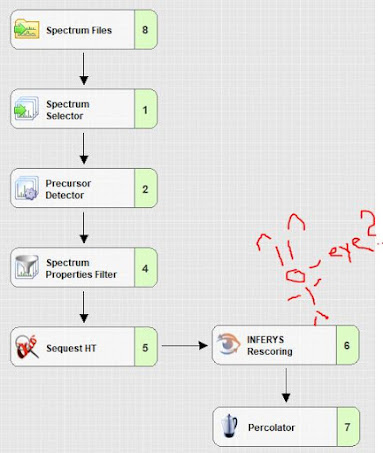 According to a press release from ASMS this thing drops the false discovery rate of peptide IDs down to 100 incorrect out of 100,000 PSMs!  (That implies we were getting more than that before? Uh oh! Just kidding. Yes, we make more mistakes than that typically. FDR 0.01 doesn't mean 1% mistakes, but it's a decent estimate.)
Worth noting from the manual: INFERYS works for HCD MS/MS spectra of IAA-alkylated cysteines. You can use whatever enzyme you want, but this version does have those limitations.
What else is new? I'm just interpreting from the manual now, my PC is all locked up making a library.
1) You can import your study factors from an Excel table! For a complex study, that could be a huge advantage.
2) TMT Minimum % occupancy cutoff! When you are doing a TMT study, particularly one where you're using more than one Plex set, if you say "unless I see every quan channel toss it" cuts out a lot of data. What if you could say "toss it if I have less than 81.24% of my quan channels?" That's helpful for sure!
3) Enrichment charts for downstream analysis sounds great! I messed it up somehow on my first try. I'll double back.
4) WHOA. Diagnostic fragment ions AND neutral loss assignments? Yes, I know MaxQuant has done this since the 1970s or whatever. But this is great for people who use this software!!

Okay, I'll double back to this one. You can filter things like this if you use/misuse the SugarQB nodes on older versions of the software.
There are a few more things I've noticed that didn't quite make the "New in this version" section of the manual. I'll double back after I've had more time to mess around with it!