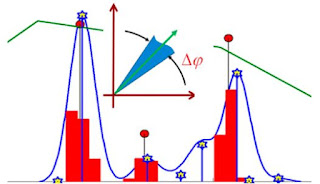 Could this be a hint of things to come?!?!

Last year some people at Thermo, including some Makarov guy, published a paper on a phase constrained deconvolution alternative to fast fourier transform (FT) (that you can find here). Honestly, it looked like kind of a thought experiment. The fourier transformation is a great math trick that allows you to go from frequency of orbitals to masses in these instruments (but has, no joke, about a thousand other uses behind the scenes in today's world).

The phase constrained deconvolution goes beyond what the fourier transform can do -- pushing into the limits of "fourier uncertainty" where our instruments currently don't, and improving both resolution and sensitivity.  Again -- cool paper, but ---

Keep in mind that this chart is biased (smaller m/z gets higher resolution in the Orbitrap -- even with phase constraint model) -- but look at these flippin' numbers for the TMT reporter region resolution (this is an ultra high field Orbitrap -- I think this is the D20 with 5kV on the central electrode, but don't quote me --if I'm right, this is what is in the Tribrids and HF/HF-X; D20 with 2.5(?)kV is Elite)

Okay -- so I have to throw this in, because I've got a meeting with the developer of this thing planned --

The box on the right isn't the clearest, but the red peaks show complete baseline resolutoin of the 127 and 128 TMTC/N isotopes using 15,000 resolution on a Fusion/Lumos. Given that we use 50,000 resolution to resolve these in our lab -- 15,000 translates to 3 times faster!!

Plus, I've been told that it's really easy to just put it out of sight in case your service engineer is all nosy. If he's coming to fix one system you can just take the FTMS Booster and plug it into another one and use it on that one. Whichever one needs a ton of resolution that day.

I'm not trying to stir anything up this morning -- the Phase constrained deconvolution looks amazing -- but the FTMS booster is something that I could buy today (if I had the budget for it) and it costs less than an HPLC that I really want.

EDIT: MassSpecPro posted this link yesterday -- understanding the Fast Fourier Transform. If you want to know more about all of this stuff, this is a great starting point!
Posted by Ben