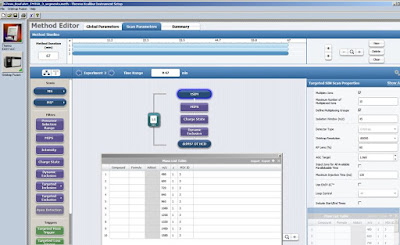 First off -- if you haven't seen BoxCar yet, you should check it out.  Once we all can do it, I think it will change how shotgun proteomics is done from here on out.

That is the kicker, though. It's going to be a bit before we can all do it -- and a bit longer before all of our data processing software can handle the output (mucking about with the MS1s is rough on label free quan.)

You know what doesn't have a downside -- just a massive potential upside? REPORTER ION QUAN.

I'm on iteration 48 and (with some false starts) getting massively better data using what the native Fusion software (whichever version came out in December -- the one that adds the "30Hz" and the funny quad isolation glitch if you use IC).

I won't walk you through all the stuff -- but if you click on the picture above you'll see what I've gotten around to method-wise.

3 Instrument methods (or segments) consisting of just these things: 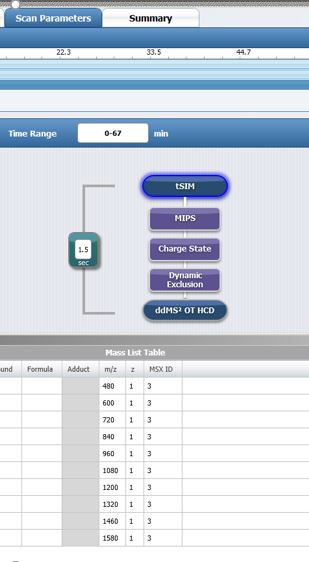 The three segments are identical -- with the exception of the fact that each segment has a separate set of 10 T-SIM scans. For TMT, where my care for the MS1 scans across the peak is not the highest, a total cycle time of 4.5 seconds is just fine for me. 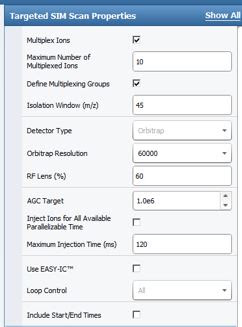 What I'm running right this minute uses a 60k MS1 scans, so this is the screenshot, but what I've been running has primarily been 120k -- it just hurts me to use 600ms on MS1 scans -- even when they're this good (and HOLY COW) the MS1 scans are good (below)

The individual segments are easy to set up. Important to note, the AGC target on the Fusion is the target in the box DIVIDED by the number of MSX events (took 5 runs to figure that out from the scan header -- I was still impressed by the quality of the data) 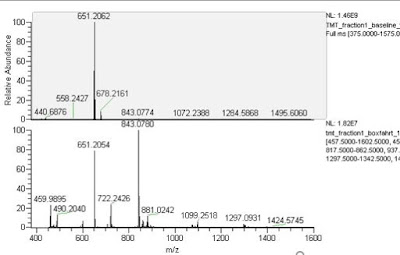 It's really easy to see the improvements in the MS1 signal distribution as shown in the BoxCar paper (I've got a bunch of examples just like this -- I'm not picking and choosing). In the top, this obnoxious singly charged peak uses up the entire AGC target -- you can't even see the 843 or 722 or a bunch of other really good ions -- msx-T-SIM it -- there they are!  Then -- you start to wonder -- if dropping from 1e9 to 1e7 is gonna work out real well and you realize you divided 20ms fill time between 10 T-SIMs...

Looking at the Fusion scan headers has caused people to eat Tide Pods (I can't prove this) but it helps if you think about them historically. 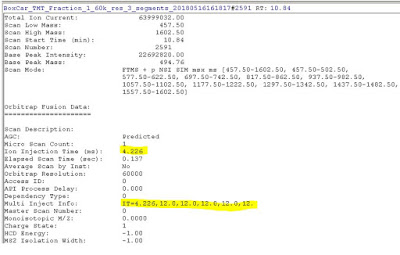 I highlighted the ion injection time -- it brings the first one to the top. This isn't a sum of all the multiplex injections, just the first or shortest one (difficult to discern because the first one is almost always the shortest). You'll see in the second line, the injection times of the first(?) 6 injections. Your fill time is a sum of those (plus the other 4 that can't be displayed).

Thinking about it historically -- how old is Xcalibur? Somebody probably knows. I don't, but if you told me that if you dug really deep into it you'd find Xeroxes of the punch cards that were used to code it, I wouldn't be shocked.

How long have we been able to multiplex? 2012. when the QE came out? And even on the great Q Exactive Classic, I've never successfully multiplexed >5 ions. If the scan header only has enough room for 6 multi-injection spaces -- it makes sense to me.

Getting MS1 improvement is easy. The tricky part was getting the Fusion to fragment the stuff that I tell it to -- the most abundant, MIPS passing, peptides it sees. If you use an MSX and MSX control, it seems to get confused, cause this is what I tried first -- 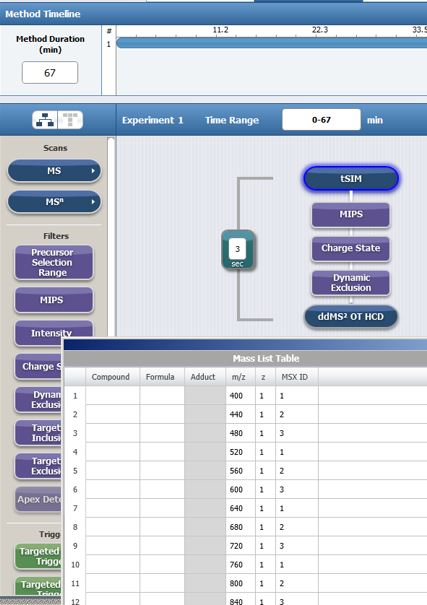 Don't get me wrong, the MS1 scans look great! But it didn't select anywhere near the number of MS/MS scans that appeared available (to me -- admittedly limited measurements). It is quite likely someone smarter will have better success, but --

Breaking them out into separate segments appears to get me more IDs -- even just using big T-SIM windows in a single MS1 scan appears to help!

Let's sum this up.

#1) I'm a BoxFahrt believer
#2) OMGauss, I can't wait to be able to do BoxCar right
#3) Umm....I'm getting an impressive boost in my TMT labeled peptide IDs with BoxFahrt -- can you imagine what BoxCar can do!??!
#4) I'm doing TMT11! I'm, of course, not even using the ion trap on the instrument!   Very next thing for me (when I get the excuse to tinker again) BoxFahrt with parallelization for MS/MS in the Ion Trap!! I swear, the more I look at it, the more I think it will work better than the Q Exactive methods.... it could be filling and doing low res MS/MS scans simultaneously!
Posted by Ben