EASI-tag -- some lab in Germany is working on new reporter ion technology! 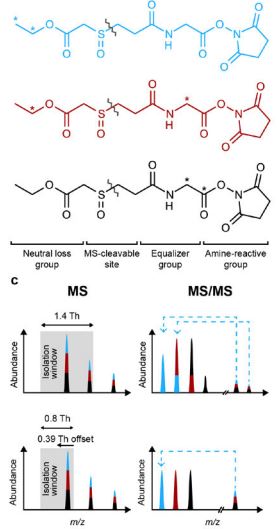 What a busy week! Some labs would be content with identifying a major point of inefficiency in every mass spectrometer in the world and demonstrating a strategy to confront it -- and maybe take some time to sit around and feel smart about it.  This new preprint shows that this isn't how they do things. 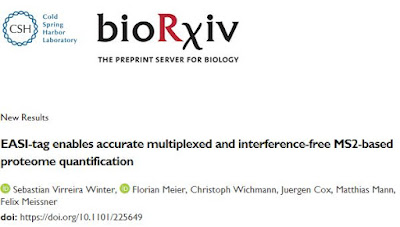 If you're thinking "hey! we have lots of reporter ion tagging technologies already. what could this one add?"

It is worth keeping in mind that this was a single shot of yeast digest on a 95 minute 45cm Dr. Maisch column on a QE HF -- this setup alone (sharp peaks, sample with only around 4,000 proteins on a fast instrument) would probably cause some reduction in ratio suppression, but when TMT10 first came out, Dr. Min Du and I 2D fractionated some human protein digest we labeled in 1:2:4:8:16 -- and 16 doesn't look like 16 -- it looks like 8-10 on a QE Plus. (This is the example set in any of the TMT/iTRAQ Proteome Discoverer processing videos I've made over the years.) If you could really see a 144 fold difference in MS2 scans? This is huge.

How's EASI-Tag do it? The reporter fragments off at significantly lower energy than it take to break the peptide backbone. The authors use a 2 stage collision energy, one low, and one normal.

They also do two things to the QE HF I'm not sure I understand the logic behind.

#1 -- They offset the isolation window for MS/MS
#2 -- They use a special setting they've developed for the QE HF software to preferably isolate the monoisotopic peak. Since we're adding a tag to these peptides, this is about the opposite of what we normally do -- for example -- 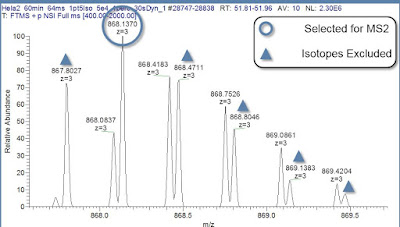 When looking at a peptide greater than around 1600Th -- the M+1 peak becomes the most intense species, statistically, on something as large as this peptide, the M+2 is almost as abundant as the monoisotopic.  Since I'm signal starved and the heavy isotopes are distributed evenly across the peptide (and the Orbitrap onboard computer can identify the monoisotopic -- regardless of what is fragmented), I generally want the M+1 to be fragmented....

OH -- They describe the reason why they did this in Figure 1 c. Both the preferential selection of the monoisotopic and the offset. I think it has a lot to do with the particular characteristics of this tagging technology and doesn't mean I should start reoptimizing my other reporter ion experiments.

The co-first author on this great new study is one of my fellow instructors at the Advanced Proteomics summer school in Vienna in July! I can compartmentalize it in my brain (forget about this entirely -- there isn't all that much space in here...) and ask a million questions this summer!