In depth analysis of the effect of phosphorylation and pH(!?!?) on ubiquitin! 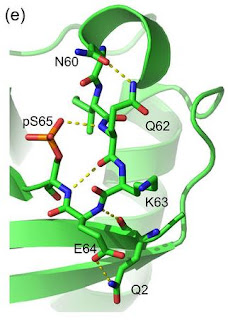 You know what I was just thinking? The ubiquitin process in mammalian cells just wasn't anywhere near complex enough....

...you know what we need? A modification on the ubiquitin modification itself that has far reaching biological impacts on whatever ubiquitination is doing in the first place!

This great new study didn't discover Serine-65 phosphorylation, but they go far out of their way to figure out what the heck it does -- and -- it's complicated.

You won't find much mass spec here. I think they only used it to confirm they'd purified phosphorylated ubiquitin from the unmodified variant. Most of the work here is NMR (i.e., I'm not real confident in any interpretation I could draw from their results, so I won't say too much about them) but pH is also involved here -- yikes -- 'cause it affects the charge on the phosphate group (making me just a little concerned that this isn't something we think about in terms of phosphoproteomics when we chemically enrich them and drop them in formic acid -- are we losing tons of biologically relevant information -- and could our technology ever possibly get us to it -- maybe neutral or negative phosphoproteomics?!?)   And the longest sentence ever award goes to....