MaxQuant.Live Targeting! Fragment the same peptides in EVERY run! 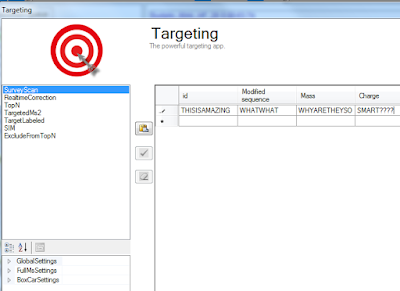 Okay -- I apologize if you're already tired of hearing about MaxQuant.Live. I'm afraid it's only going to get worse. I was excited enough once it was installed that I didn't sleep at all the first night -- and I realize that is weird. I just delayed colleagues samples and played with our new super powered HF and the data coming off of it and I'm having a really hard time not driving the hour into work and just staying there all weekend -- but the HF is busy doing some DIA study....

I haven't used MaxQuant.Live Targeting yet. It's next on the list. And it might be more important to how our field moves forward than even the concept behind BoxCar. It fixes a problem our field has always had and one that I think none of us every really thought could be fixed.

In proteomics we're always doing the stochastic sampling thing. If you run the exact same sample 3 times, chances are that if you compare the peptides/proteins ID'ed in those runs they'll look something like these 12 minute CE runs I was messing with. In 12 minutes, I can't get the whole yeast proteome -- and the variability when the instrument can't possibly fragment every peptide present has a degree of chance to it, resulting in an overlap like this. 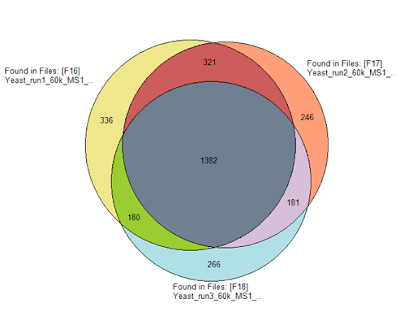 Increase the depth of the coverage relative to your proteome, and this becomes less of an issue. But we still can't get every peptide every run, so this problem is present in every run to some degree.

What if....you didn't have to stochastically sample? (Am I spelling that wrong? Blogger thinks so)

What if you could run a sample once and then use the data from that run to fragment every peptide from that first run in every sample afterward? Could you run the same sample 3 times and get the exact same results? That sounds impossible, right? 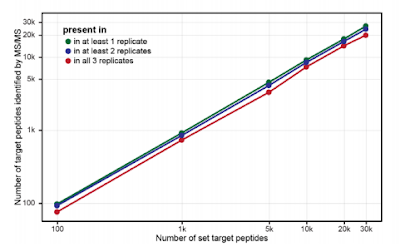 These are the results. They can achieve almost 100% match across 3 runs at over 20,000 peptides. They can identify peptides that can't even be SEEN in the MS1 scans in some samples because they're too low at MS1, but because the Targeting App has been intelligently adjusting the retention times while looking for the peptides from the list that it was given and the ion is essentially pulled out from nowheresville the same way you can see a peptide by PRM or when using other intelligent acquisition methods like PROMIS-Quan or TOMAHAQ.

I've posted the preprint this data came from here previously. The RAW data hasn't been made available yet, and I'll know more once I dump a huge list into my HF when I get a chance.