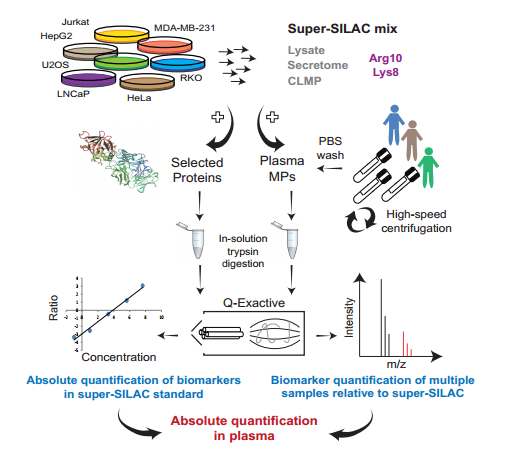 I stole the picture above from this paper from Michal Harel et al., that is currently in press at MCP.  Technically, this is an incredibly sophisticated paper, but it might be the solution for frustrated researchers out there who just can't get beyond that few hundred protein limit in their plasma proteomics study.

I stole that pic cause it sums it up.  PROMIS-Quan is short for: – PROteomics of MIcroparticles with Super-SILAC Quantification.  And if that doesn't suggest the difficulty of setting up this study, nothing will.

The plasma proteomics is kind of broken up into two steps, the normal stuff, and then plasma microparticles (which are really freaking cool in their own right...just ridiculously low abundance).

If I have this all straight in my head, this is the general idea.  The SILAC supermix is going to have representative proteins from just about protein/peptide humans can produce.  We can put in as much of that stuff as we want, including levels that will be easily fragmented and identified.  To get around the insane difference in dynamic range of proteins in plasma, we don't actually go after fragmenting the same peptides/proteins in the plasma.  We know they are there because of the SILAC pairing effect.

Nice, right?  Some people set their instruments so that when they do SILAC they only fragment either the heavy or the light pair anyway.  Since the SILAC pairs are clear as day in high res, you don't need to waste time fragmenting both the heavy and the light.  This study exploits this fact to give us a completely unprecedented level of plasma peptide coverage.

Now, if I could find one fault with this study it is this:  That it would be hard for me to replicate these results myself because my SuperSILAC mix would be different than the one they used.  Now, if some enterprising soul would make up, I don't know, 10,000 L of SILAC cells and we could all use the same supermix for the next 5 years or something, we'd be in business.

If you are doing plasma proteomics, thinking about it, or did it for years and got nothing out of it, I strongly suggest you check this paper out.