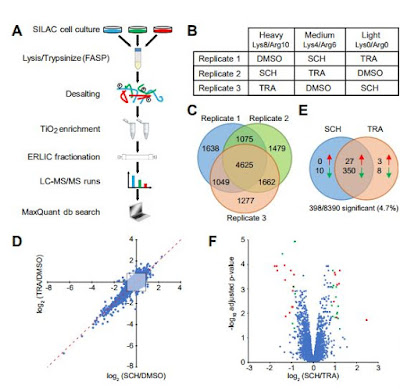 This new study in press at MCP is a practical "how to" guide for studying MAP kinase inhibitor phosphoproteomics with high certainty in cell culture!

This is actually an extension of previous work from this group on established inhibitors (that is open access, has some incredibly nice figures and is available here!)

In this study the authors look at two ERK inhibitors and compare them to the clinically used ones that inhibit other proteins like BRAF and MKK1/2.

The proteomics is pretty clearly explained in the figure at the top. An Orbitrap Fusion is used for the LC-MS/MS analysis running each sample in 3 replicates. This is where something interesting happens. 2 of the replicates are ran using OT-OT (orbitrap for MS1 and MS2) analysis using the "top speed" method. The third replicate is identical, as far as I can tell, except the MS/MS is obtained with HCD-iontrap. You'll discover rapidly when running the same sample with just this difference in instrument settings (one toggle on the Fusion) that ID coverage is a little different. The little differences between the speed, sensitivity and general physics of the two MS/MS acquisition methods can lead to differences in PSM identification. This is a really neat trick that I hope to see more in the future!

The downstream analysis is performed with MaxQuant with LIMMA thrown in for significance changes. The SILAC labeling is switched between each replicate(! lots of work!) and the result of all this effort is a really nice picture of the total affects of the MAPK pathway global proteome and phosphoproteomic (most important) shifts when each of these inhibitors is employed. One of the compounds is shown to have a high number of off-target effects, while others seem to do exactly what they are stated to do!

This is an MCP paper so a serious level of downstream validation goes into the study as well. I'm obviously not all that qualified to assess how they did that, but the experimental design, sample prep, enrichment and downstream data processing is all top-notch work. What we get out of this is a method section that I would follow as if it was a Kristen Kish recipe in my kitchen if I had to assess the specificity of new drugs that affected anything in the MAP kinase pathway (or, maybe more importantly, if their inventors claimed that's what their compound did...)  ;)

All the files from the study are available on ProteomeXchange via the PRIDE repository. There is a serious amount of work here, so the files are divided into 3 separate numbers.