Tracking aging and senescence with proteomics 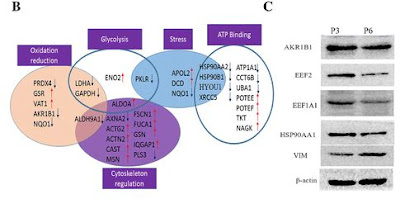 In this young field there are so many papers that just seem to just revolutionize it. The leaps and bounds you guys are making just seem to appear out of nowhere. Sometimes, though, its nice to read something a little more straight-forward that introduces a couple new things and doesn't make me feel inferior to the authors for not thinking of it first.

(Seriously, though, there was a ton of stuff at ASMS like this. One of the very smartest things I heard at the whole conference was in a casual conversation and a friend mentioned a method they've been using in their core that is so elegant and simple and brilliant that I swear everyone just stood around with their mouths open. Since nothing on earth seems to stop me talking for much time at all, I was the first one to yell "why haven't you published this yet!" I'm giving him a couple days to tell me if  they're writing it up before I make all y'all feel really awkward for not coming up with it....unless everybody is doing it and no one has ever thought to publish it cause its that simple.  Not every smart thing is published...and that's why conferences are a great idea!)

Back on topic:
This paper is a good example. It isn't a run-around-screaming-scaring-dogs-and-squirrels kind of study, but it is a solid piece of work. It is from Yang Lu and Jingchao Wang et al., and is a look at how kidney tube epithelial cells progress as they age.  Not a headline grabber exactly, but I got 2 really interesting points out of it.

The first is that senescent markers seem to be some really high copy number proteins. Seriously, look at that list above. It is even more pronounced in the tables in the paper. When we were gel slicing and running the Finnigan LTQ we saw virtually all of those in every sample. Going down their table it was like --- wow! I know all of these! Conclusion 1: Senescence (aging) markers are "high fliers" in that they're high copy number and/or very amenable to LC-MS analysis.

The second thing I learned about in this study is the Molecular Annotation System (MAS). Which is an older, but unknown-to-me pathway generation system. It isn't the most high-tech system I've ever seen, but it has some nice functions. 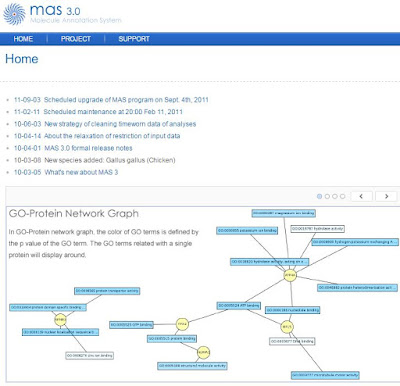 This thing above is simple, but might throw a nice new angle in your downstream processing pipeline. It builds networks from your observations and color codes by P-values. Another function is the auto-generation of heat maps based on the data that you feed into it. The input interface seems pretty flexible, and if your collaborator just wants a heatmap -- hey, here is a webinterface to point them toward.

Oh, I guess there is a third thing I learned and get to look forward to as I continue to get older -- the conversion of the epithelial cells in the transfer tubes of my kidneys to mesenchymal cells where they lose flexibility and proper function. Yay!