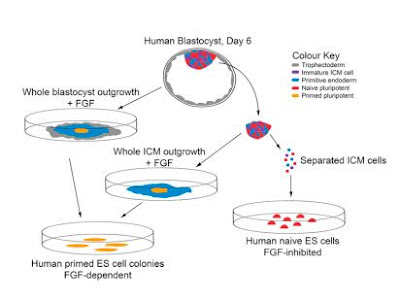 Stem cells have been some confusing business. Its a hot topic, so you can make a name for yourself real quick by making a new development and marketing it well. There was also a couple of false alarms, but this one looks real!

The paper in question is from Ge Guo et al., out of the University of Cambridge. At first glance it doesn't seem like a big deal. People have taken loads of different cells, put them in the right media (almost always pumped full of so many artificial growth factors that, while you could learn a lot from them, aren't really what we're looking for).  And there have been some awesome successes in mouse cell lines. Which, again, while cool isn't really what we're looking for.

An interesting aspect of this work is that the techniques don't appear revolutionary at all. It looks like they just cut out all the shortcuts. Another tricky aspect appears to be the controversial nature of the field along the grounds of what a real naive stem cell is, versus a cell that expresses a certain set of features. Honestly, this is a really interesting paper. There are big differences regarding glycolysis (particularly based on mitochondrial functions), the level of DNA methylation, activity of a slew of different pathways, etc.,

But to this un-expert eye, it seems like they put a pretty solid list of requirements together and it looks like they met them. I'm gonna assume the reviewers of something called "Stem Cell Reports" would be ready to lay the smack down on some bad science in this field.

Not proteomics, but the most interesting thing I've read today!
Posted by Ben