I am going to admit it. Every single time I've heard about FPOP, my brain has started saying something about "Pop and lock," which I assume is in some dumb Dubstep song on my Pandora station (and apparently that, above, is what it is...)

What is it?  What?  FPOP!  What is FPOP? Oh, its a mass spec based protein structure characterization method!  Wait! Here is a picture from this awesome new paper from Aimee Rinas et al., that I'm going to talk about once I get back on topic. (Get back on topic, Ben!) 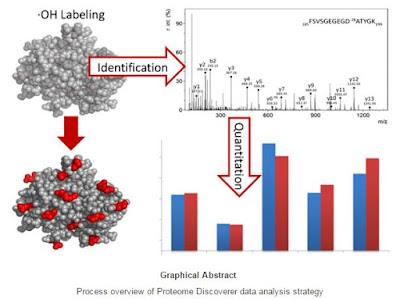 Who needs an NMR (whatever that is...) to figure out what domains of their protein are where!?  Not you if you've got an Orbitrap. Your protein in its 3D state hangs out in some solvent and then you hit it with oxidating conditions. The domains exposed on the surface are oxidized/modified. Compare, for example, a mutated protein to the wild-type in this way and you can look at how your mutation changes the protein 3D structure. BOOM!

An interesting note from the paper. We only know the 3D structures of about 11% of the proteins in Swissprot. I think its because whatever that NMR thing is, isn't all that fast. Not only does this FPOP thingy give us the ability to find out stuff about our 3D structures without other equipment, this is LC-MS, so presumably we can automate it and speed it up!

This cool paper addresses this labeling technique and shows you how you can use the FPOP methodology and process the data with Proteome Discoverer.

Now, not everything in the world is easy to do. And setting up Proteome Discoverer for this experiment is one of those things that isn't easy to do. Good thing this clever team in Indianapolis set up the whole thing for us!

Thats what it looks like. Why all the nodes? Well, cause a downside of FPOP is that it doesn't just put one modification on the protein where it reacts...it can put a whole bunch of different mods. And you need to use multiple nodes to get that many mods. The use of Mascot and Sequest allows for higher certainty in the assignment of the modifications (if Mascot and Sequest both agree on this ID, then that adds more certainty, right?) which is important when your search space is this big...even on a single protein.

With all of these competing engines and mods, you'd immediately worry about FDR, right? A second layer of FDR calculations (performed using a cool Excel add-on!) shows that this not only works, but when you are looking at PTMs with HRAM MS1 and MS2, the number of false identifications really isn't that bad!

EDIT: I recently spoke to an author on this study and realized I left out something important here. FPOP labeling is performed with a specific wavelength of lazer (laser?). This is a critical requirement for performing the experiment.