Man, this is why I'm still here doing this stuff, I guess. From the title and abstract alone, I bet you probably didn't want to read this. Why would you?

Well, you can get a program developed for this study from Github here that will allow you to operate your Q Exactive system with some new super powers!

MetaDrive? What's that do? Well, it's nothing to yell about really, it allows you to look at intact proteins on the fly and deconvolute them and then it selects multiple precursors for your intact protein (like targeted multiplex quantification) and will hit them with stepped CE allowing you to get massively more signal on your intact proteins. That's all.

When you do intact proteins on an Orbitrap and select an ion for fragmentation the best case scenario is that it looks like this and you selected that one charge state for your MS/MS fragmentation. 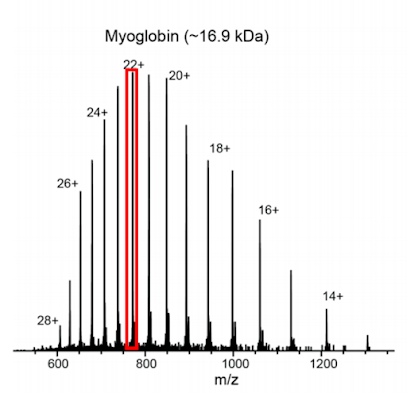 You're only getting a fraction of the total protein signal for fragmentation. It's a large part of the reason that MS/MS scans of proteins look so lousy.
What if when this signal came off your QE, there was a program sitting there that was smart enough to deconvolute that protein and recognize multiple intense charge states? Keep in mind that the example above is a pure myoglobin standard. Top down doesn't look like that normally because you'll have multiple protein envelopes overlapping.
Just imagine if you were able to select even these three below? You've effectively tripled your protein signal for fragmentation! 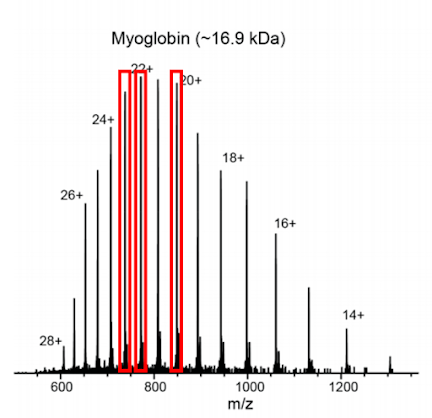 Even better, since the Orbitrap is by far the slowest part of this process, there may be effectively no increase in the amount of time each cycle takes (like BoxCar, you're accumulating multiple isolated ion windows, holding them and then scanning, but here you can fragment them!)
You know, not a big deal. The authors might have understated how freaking cool this is because they do note that the real time calculations are a little slow. They're working on implementing the screaming fast FlashDeconV program into this to help alleviate the bottleneck.
The files are up on PRIDE, but still locked. I already put in a request to open them up if you want them!
Posted by Ben