Effects of column and gradient lengths on proteomics! 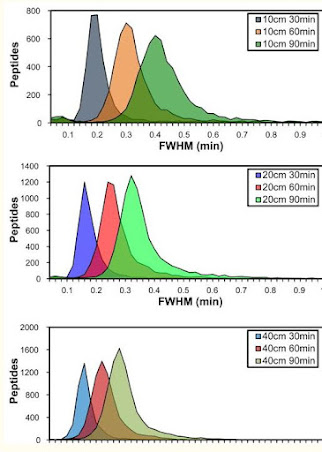 I spent time on a lot of references, and eventually found the absolute worst one as a follow-up from some ramblings from this weekend.

Want to ruin your lunch break reading about stuff you don't want to think about? I recommend this one.

We convert biological molecules into ionized gases and move them around however we want -- even blowing them to bits -- in vacuum chambers with increasingly sophisticated tools --- and if I don't think about peptide solubility I can't maximize my results?  BORING. However, that's how it works.
I dislike this paper the most because it makes it seem so simple.
I strongly recommend you don't read this paper or my main takeaways.
Takeaway #1) When using a 10cm column there is basically no difference in the number of peptides identified when increasing from 60 to 90 minute gradient. Too much time, too little chromatography material.
Takeaway #2) When looking at gradients of up to 90 minutes in total length, there was basically no difference in the number of peptide IDs when moving from a 40cm to a 60cm column. You've got more chromatography material, but to really take advantage of that you'll need a longer gradient.
This one I'm not sure would reproduce the same way today. An LTQ FT Ultra system was used and we're talking about probably 5 MS/MS scans acquired per second? I've never actually ran one of those myself, but I thought it was comparable to the Orbi XL. I'd expect if your instrument was 10x faster that you'd see a difference here, but at 90 minutes it might not be a pronounced one.
Hopefully this is the last I have to discuss this for a while, because it's booooring, but it's stuff we do have to consider. I've seen a couple of great studies recently with important samples and expensive instruments and a fraction of the #PSMs/peptides/proteins that I'd expect. It's such a bummer to pull down the RAW files and see that something as boring as chromatography held the whole thing back.
Posted by Ben