I disappear into my day job for about a week, don't answer any phone calls or emails or blog comments -- and this is the first thing that I get caffeinated enough to write...ugh...

The only fun thing about working on this post was trying to find a video of a Boston Terrier yawning. This is as close as I got.

I really like EasySprays -- if you find something easier, let me know -- I'll switch to those, but to make the math work out that they are a great idea financially I think they need to last at least 2 months, give or take.

So far -- 2 things appear to be the most critical -- #2 doing the long and boring column conditioning protocol and #1 doing high organic "column restores" periodically.

#1) Let's talk about column restore (I might have made this name up, but it is discussed in the so-boring it will make you want to get into the diethyl ether (please don't) to make it stop) EasySpray manual -- at least the new one, anyway)

The logic is that the spray instability (which is the #1 reason why we stop using them) here has more to do with the lines (including waste) leading up to the EasySpray. Column restore is picking up a full loop injection of organic and running it through the system, followed by maintaining tip top organic for at least 30 minutes 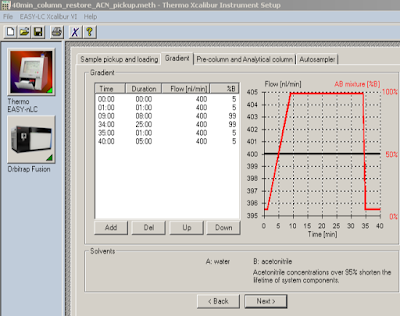 It really seems to help. If the spray stability starts getting wobbly, this generally gets me back to baseline -- or at least allows me to lower the voltage back down a bit.  I run it a couple of times a week, probably and -- anecdotally, it appears to help keep the columns going beyond the 2 month cutoff.

#2 (In this order because I couldn't figure out where the photos went.) 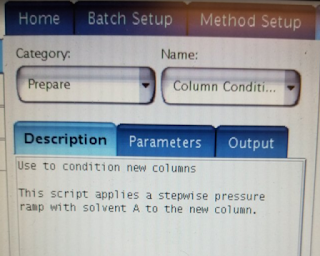 I saw this in the manual, saw it was another 40 min of the nLC doing stuff and the mass spec not collecting data and thought....

Worth noting -- we've got 6 EasyNLCs hanging around and 2 of them have this script included in it. The oldest one of the two has this version. 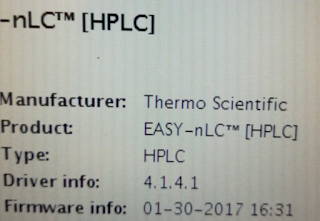 (P.S. if you have a service plan you can request service update your EasyNLC software. There may be earlier versions of the Easy1000 that can't be brought all the way up to the newest firmware but our local FSE is investigating that, cause we have a request in now for all of ours)

If you don't have this software or have a different LC there is no magic to this script. It just starts running buffer A at low pressure and gradually steps it up to full operating pressure over 40 minutes. The idea is that if the beads or particles or whatever is inside these things got unsettled a little during their travel to your lab then this will help get back where they all ought to be. Sounds like pseudosciency mumbojumbo to me, but I'll probably keep using it cause - in this anecdote -- column life is now longer than it was before.