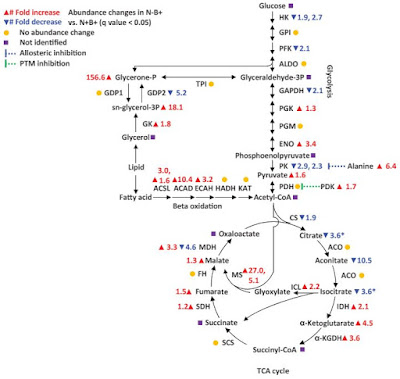 Another amazing paper this week in a non-proteomics centric journal.  This one is in Environmental Microbiology and integrates proteomics and metabolomics to figure out how symbiotic relationships work between fungi and bacteria!

A lot of the biology is mostly new to me. I vaguely recall something from some biology class (...the more I think about it the more I feel like it was in the 90s...then the pastel flashbacks start happening again...did I really think a mullet was a good idea...stop thinking about the 90s, Ben!!) about fungi and bacteria working together in symbiotic relationships.

These fungal-endobacterial relationships are the focus of this awesome paper. There are some serious technical challenges here like;
- you extract proteins from these systems and you've got proteins from multiple species
- the fungal biomass is way larger than the bacterial biomass

It is worth noting that this isn't trivial at all, there are several studies leading up to this one, and several studies on the way but they have assembled a really smart system for separating what is what!

They have a model fungi that they can grow -- and suppress the bacterial symbiont! (Spell check says that is not a word, but I'm leaving it. If they look at quantifiable changes in the proteome (also not a word, I might add...) and the metabolome under different conditions in the normal fungi-bacteria and the fungi-suppressed bacteria, then they can start to figure out what's what.

In this study they use media that has plenty of nitrogen and media that is low in nitrogen and compare the two conditions and extract for global proteomics and metabolomics.

The metabolomics is done on an Exactive running in negative only mode. In an interesting variation I've never considered (that makes a lot of sense) early in their run they use a lower scan range than later in the run. Since I keep seeing things like lactic acid come off my columns here around the 1.5 minute mark, and my lipids don't start showing up until around 10 minutes, I'm absolutely stealing this trick for the next project!

For the proteomics, I'm just a little fuzzy on the sample prep...nope! I get it! I think they are taking part of their protein lysate and digesting it in solution and the other part is FASP'ed and then they're combining. I'm not sure why I haven't done this....for every paper we've seen out there that has shown that this digestion method and this digestion method get us slightly different results, it's obvious, right? If you want to get a comprehensive picture why not use a couple digestion techniques...? Honestly it seems stupid obvious right now, but I'm not sure I've ever seen this done either!

The proteomics are straight online MudPit -- 11 hour 2D into an Orbitrap Elite running high high mode. The data is at PRIDE PXD003240.  The dataset isn't available yet (this paper is brand new). Honestly, I just wanted to see how big these RAW files are!

Okay, gotta wrap this up and go to work!  What do they get out of the metabolomics and proteomics? 1) They can tell what parts of the total metabolism of this biomass is coming from the bacteria!  Depleted bacteria load depletes these metabolites (boom!) and the global proteomics backs it up.

Side notes: they do label free quan with ProRata and downstream stats with QVALUE in R; they have a custom designed set of metabolic standards they use for verifying metabolite ID and differential stats appear to all be done in various R packages.