It has been enormously exciting (at least for me!) to watch our field develop over the last decade or so. Every year we get more and more coverage of our proteomes and the file seem to have more data that we don't have the algorithms to extract yet and...yet...it is also getting kind of intimidating! Discovery is great, but we still want to be able to easily do hypothesis driven research -- which is tough in a datafile with 1e5 spectra and 40,000 quantified peptides!

If you wanted a tool to narrow this down a little without learning a completely new software interface, you should check out this study from Michael Degan et al.,!

I'll be honest, I don't have hands-on time with this yet. I just downloaded and unzipped it, but I'm running out of time this morning already. The concept is good enough that I'm gonna trust them that they executed it as they described.

Okay...one super minor criticism...it was a little tough to find where I actually downloaded this thing (okay...accidentally closed the tab where I got it from....then found it tough to find a second time, n=2!), but you get the software from GitHub here. While I'm at it, here are the instructions for the software!

Why would you use this? If you are about 75% of our field, you probably are already using Skyline (I made the number up) so you're not going to have to install and learn a new software interface. And...unless I'm completely mistaken -- Skyline has never had features like this at all. You tell the Biodiversity Plug-in your organism of interest and it populates known pathways for the organism -- and you use those pathways to zero-in on what you want to study -- and browse the quantitative data for those pathways in the RAW files you've loaded!  RIGHT!?!?!?

Not excited? I don't think I explained it right.

Say...you've got all this data from high-throughput screens of your drugs that suggest that this drug is inhibiting cell growth by messing up central metabolism.  You could process your 400 RAW files the traditional way and then dig through the resulting 5e6 identified and quantified peptides which will take at least a couple days of crunching time -- regardless of what you are using to process your data OR...you can focus on the pathway you are interested in.... 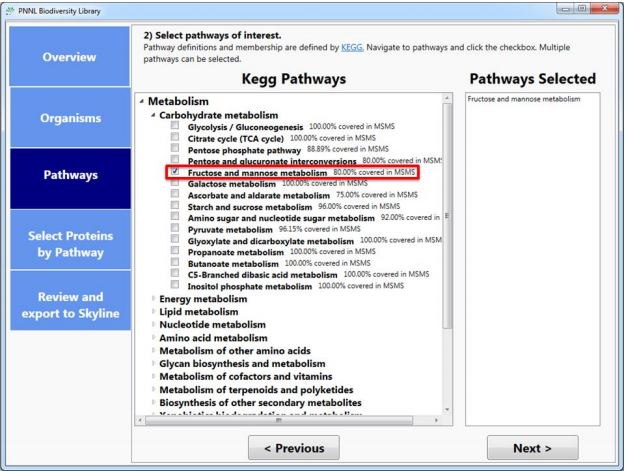 This gives you a % coverage OF THE PATHWAY YOU ARE INTERESTED IN!!!  80% of the peptides in the proteins in this PATHWAY (sorry, having caps locks problems) are contained within this library and easily accessible from within this plugin.

Then you input this specific hypothesis-driven data into Skyline and can look at the quantification of the peptides/proteins in this pathway in all your cells. The data reduction alone means that you can do this in real time (rather than 2 days to process...and maybe a day to filter later).

Even if we ignore the amount of data reduction you have here -- I'm going to guess that you've collaborated with someone who was aghast at the big Excel spreadsheet you gave them with all the IDs and quan at some point -- when they just wanted the mass spec to confirm their hypothesis. And this might be the easiest way to get right to this that I've ever seen, both for you and for them (once they download the amazing free Skyline software, of course!)

Worth noting --- this Plug-In has more features than what I'm focusing on here. I'm selfishly just going after what I find the most interesting -- and since it is in Skyline, I think this is going to be compatible with every instrument type and vendor and scan-mode (they specifically mention that it works with data-independent (DIA) type experiments as well.
Posted by Ben