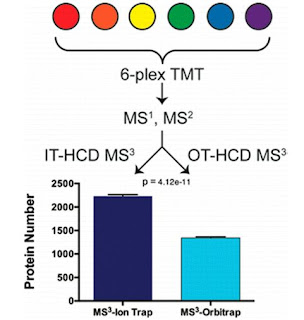 Orbitrap Fusion devices have the well-advertised ability to do the SPS MS3 technique that was originally developed by reprogramming an LTQ-Orbitrap Elite.

In the typical technique, the ions flagged as tagged peptides are fragmented in the ion trap and then large precursor fragment ions that contain the tagged side of the peptide are isolated for HCD Orbitrap scans.  At this point many studies have shown that this technique improves quantification (especially "ratio compression" problems), but doing 2 high resolution (typically 120k and 60k) Orbitrap scans isn't the fastest way to run your system.

Jane M Liu et al., think that one way to speed it up is to do the MS3 in the ion trap instead!  In this study they take some yeast digest and go to town, comparing the maximum number of quantified peptides with the traditional scan vs MS3 ion trap.  The figure above sums it up pretty darned well.

Now....you'll notice they used the TMT 6-plex. Cause the 20mmu difference between the neutron mass discrepancies in the TMT 10-plex can't be determined when using the ion trap, but its an interesting idea for experiments that are using 6-plex for sure!!

One other lab has already reproduced this!

Two quick notes: 1) I LOVE Twitter! Real time tests on study reproducibility?!?! The future is now! and 2) I thought this Lumos was just delivered.....UCD doesn't mess around!