Proteomics reveals the biology of the eosinophil! 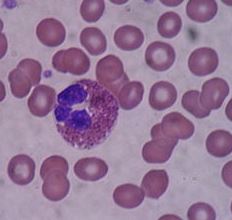 My second job out of undergrad was in a hospital clinical lab. This was a huge turning point in my life. This was where I really learned how the science of medicine and diagnostics worked and where my whole obsession with instrumentation (and quality control!) developed. I loved that job, worked hard, but a lot of the time I had absolutely no idea what I was doing.

One thing that I did was use a cytospin to stick eosinophils to a slide and then stain them. Today, I learned what those cells are, why they are important, how little we know/knew about them -- and now we have an incredibly deep proteome and a MUCH better understanding of them!

The background on eosinophils is thanks to the 974 words that Wikipedia has on the topic and this awesome deep proteome coverage and thorough downstream study is from Emily Wilkerson et al., and is in this month's MCP JPR (thanks, Saddiq!)

So, the reason my dumb early 20s self was cytospinning these cells is that they are white blood cells that make up about 1% of the normal cell numbers and high numbers of them are associated with a variety of diseases. Eosinophil actually means "acid loving" so a really simple staining technique that you can do even with no knowledge of what you are doing or why makes them stand out like the weird cell in the picture above. Large numbers of these cells mean that your immune system is fighting something like crazy and can be important clue to aid in diagnosis or disease progression.

Of course we need a proteome of these things!  At the point this study started, we knew about 500 of the proteins that were associated with this cell type.

Afterward? Over 100,000 peptides were identified (over 7000 unique proteins) and we find out that some of the 500 we did have weren't exactly right thanks to contaminated starting material.

How'd they do it? They first separated out eosinophils from the rest of the cells with gradient centrifugation on Percoll. Cause that wasn't hard enough, they also used magnetic beads coupled to some antibodies to make sure they were looking at a pure collection of these cells. (Again, this is about 1% of the cell numbers. They either started with a TON of blood or they had a super sensitive mass spec). Wait - it gets better. Then they said "well, this is a ridiculously low amount of material -- lets also do phosphoproteomics on it as well."

This is interesting -- all the peptides were ran through IMAC. What stuck was the phosphopeptides. What didn't stick, thats the regular peptides. This is a nice conservation step for anybody looking at a really low level of material and trying to decided whether they can still do phospho. The two sets of peptides were then fractionated by reverse phase high pH, fraction collected and then ran out on 100 minute gradients on an Orbitrap Fusion running Top Speed and 3 second cycle times. Interestingly, the MS1s were obtained at a relatively low 60k resolution and the ion trap was used for MS/MS. Obviously the real emphasis here was on the maximum number of MS/MS scans. Depth depth depth!

The downstream analysis is exceptionally thorough and really gives a picture of how this cell type works. What are the most abundant proteins? How do they rank in the cell?  How do the other protein abundances stack up? They take it a step further by comparing "normal" eosinophils to those that are activated in certain disease states.

Seriously, a solid study. It would have been really easy to start this study and say "hey, here is the proteome of an important and poorly understood cell type." And that obviously would have published really well on its own. Instead, they put in the leg work and really add to our understanding of this cell. No question this study is going to need to be cited in every hematology text book that is written after this month. Did Wisconsin just triple the amount of knowledge we had on this cell type? You could easily go through this analysis and make a much more thorough write up of this cell type than Wikipedia has now!  As good at the proteomics is here, the way this group takes the protein list and abundances and translates this into really useful and palatable biological information on this cell type really takes this study to the next level.
Posted by Ben