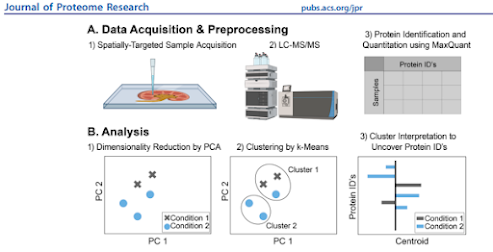 Wow. Okay, so this new study in JPR is kind of a meta-analysis of a previous study that I hadn't heard of until now and features some ideas I'd certainly never thought of.

The pictures are cooler in the 2021 study, but the analysis is a lot more mature in the re-analysis. I feel like it was a case of "oh shit everybody, look what I just pulled off!" and everyone on the team said "oh shit! submit it now while we keep working on the analysis"

I might get the following wrong, there is a lot here, but this is my interpretation.

What they did was take some mouse tissue that was infected with a pathogenic bacteria and they sliced it like they were going to image it. Instead of imaging it they used a super high precision robot (the SciFlex arrayer S3, which is like a CellenOne but way bigger, a lot more capable and a whole lot less expensive, but it doesn't have the cell sorting software. They use this to spot trypsin on the tissue in places where they want to digest and then they use a NanoMate to pick up the peptides from these spots and they do proteomics on the spots. Paper one shows that they can identify bacterial proteins and get feel for where the pathogen makes changes. Paper two is a more in-depth informatic analysis that really starts to work out the host-pathogen interface to get to the really cool biology.

While I love the idea of digesting slices and doing MALDI based proteomics on our instruments here, what we've found is that we're extremely limited by protein copy number and ionization effects. On an imaging TIMSTOF, you can't fragment anything and the TIMS doesn't do anything but some ion mobility separation. What you end up doing is peptide mass fingerprinting at 30,000 resolution and that limits us to a few dozen extremely high abundance peptides. Still can be cool, but if you're looking for somethign with less than 4 million protein copies per cell, you're largely out of luck.

What this group has done is get real dynamic proteomic range spatially across an actual infected organ. Again, I probably got this wrong, but I'm still super impressed.