Spritz -- Proteogenomics for everyone! 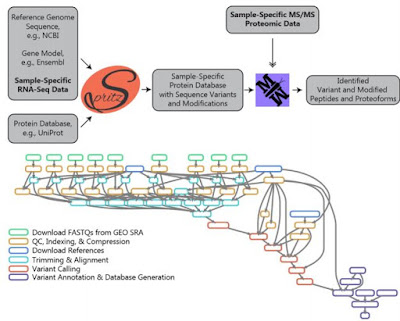 You can get the software here.

You do need the Docker Desktop thing, and if you were forced the mandatory Microsoft Edge thing in the last 5 days, Docker may have issues (my 2 PCs that had that update throw an error that my Windows version isn't new enough, my PCs that have updates disabled are just fine).

Like most Smith lab software it is really straight-forward.  You do need to make sure that you allow Docker access to the hard drive where you have Spritz.

You can either download your FASTq files from your "next gen" stuff or you can pull directly from SRA/SRX at NCBI here.

One surprise is that (being a dummy) I thought that Docker was just for GPU based software, so I wanted to make sure to run it on a PC with a decent old GPU, but the software recognizes how many CPU cores you have and defaults to using all but 1 of them.

If the authors aren't lying (it is a preprint and I don't have time to verify this) -- you know how there is a version of UniProt databases in XML format that holds PTM information? What if you could cross reference the variants and this PTM information?

The authors demonstrate the use of Spritz in conjunction with both bottom up AND top down data!!