NanoPore Proteomics -- Is it closer than we thought to replacing LCMS??? 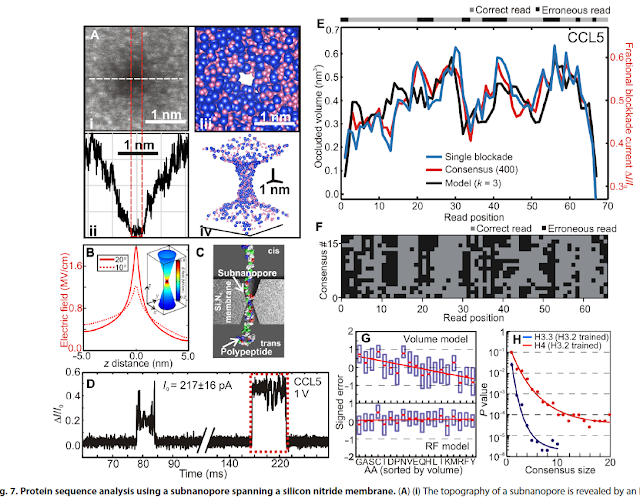 I had the distinct pleasure much earlier in my career in becoming a grandmaster in microarray technology -- right after everyone (except -- maybe the NCI) had realized the technology was massively inferior to the newly emerging "next gen" sequencing technologies.

I'll still stand by my QC pipeline for tens of thousands of microarrays by really unsophisticated statistics (powered by huge n!) even if it has, to date, been cited once, possibly making it the highest $$$ per citation in human history.

I love mass spectrometry. LOVE it. And about 18 months ago we saw the first data that conclusively proved that shotgun proteomics could compete head to head with the original "next gen" genomics/transcriptomics technology -- RNA-Seq.

However, if you weren't aware RNA-Seq is starting to fall by the way-side. It's not going to go away anytime soon, but the writing is on the wall that recent improvements in "long read technologies" will soon replace them. PacBio long read sequencing data (which I will read into proteomics data with zeal over anything from an Illumina platform!! The reading frames are soooo long!! Check it out!) is great, but the big thing -- maybe the biggest thing of the future is a humble little thing called the NanoPore.

If you haven't seen it, I bet you will soon. 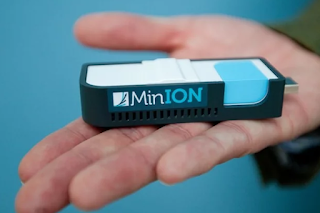 No joke -- that's it. You can sequence DNA with that thing. On the far right of it? That is a standard USB port. It uses the power of a USB port to sequence DNA/RNA. And -- it is the future of genomics.

However -- could it be the next step in Proteomics???

These authors seem to think so -- and the argument is compelling!

Now -- this idea has been kicked around for a while and I think the conclusion is "yeah -- this is totally going to happen, but maybe 10-20? years from now?"  Sitting here after reading this? I'd move that timeline up.

LCMS (which the authors refer to as BU-MS, for Bottom Up Mass Spectrometry) has a lot of weaknesses. We're improving them, but the outside world is getting very tired of them and, to be honest, I'm starting to think we'll never fix them.

And there are good reasons for these and we have lots of usefulness in solving little studies, but -- in the end -- this isn't going to be good enough for the rest of the world and they're looking for a way to replace the whole way we do things.

While I'm having my feverish rant for the 1-4 hours I'll be awake today according to this week's trend, the replacement for proteomics is NOT SomaScan. We don't need a GWAS for proteomics. We already have a couple. They're called "SWATH" and "MS-e".

However -- this is worth looking at. Or at least being prepared for!
Posted by Ben