7,500 proteomic runs on ONE column -- the final nail in the coffin of NanoFlow? 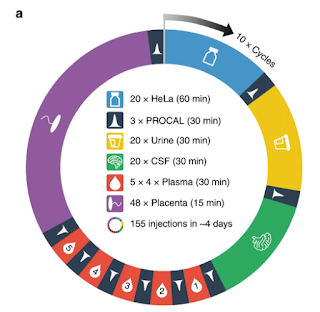 I was just writing something about how the blog was on hiatus and it occurred to me that I didn't actually have to do a good job of summarizing every paper that I read. I could just put it here and suggest you read it because it's aweome! (...brain fatigue...and maybe a high fever...)

Someone (I forget who -- and don't worry -- I'm not going to look it up and blame you) had the great idea of superconcentrating peptides and ionizing them with nanoliters of solvent per minute by electrospray ionization. This was invented for something called the LCQ or QTrap system. Young people, if you've never heard of these, don't worry -- they are terrible. Imagine 1 scan per second with 800ppm mass accuracy. Then forget I ever mentioned either.

Even worse? The sensitivity! It's TERRIBLE on those things. The solution? The nanoflow thing above.

And what happened next was amazing -- mass specs got NOT TERRIBLE! Heck, they got good, and then great! Accuracy and speed and sensitivity.

You know what didn't change, though? The stupid, complicated, NanoLC stuff! The instruments are hundreds (thousands?) of times more sensitive and we're still doing dumb and poorly reproducible stuff with our chromatography.

Is this the paper that finally ends it? 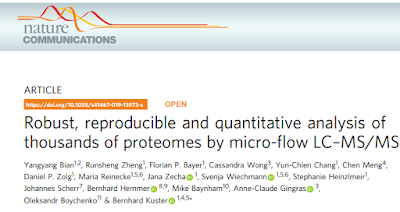 Probably not -- cause -- HPLC systems are expensive, but I hope this will make you consider NOT buying a nanoLC with your next mass spec.

My record for a nanoflow column is 6 weeks -- with a trap -- before the chromatography got all wonky. What's yours? I bet it isn't 7,500 runs!